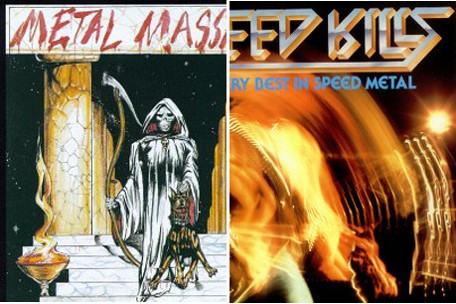 Metal compilations have been pumped out in extraordinary numbers since around 1980, but few are worth paying for and listening to regularly. K-Tel put out a comp of mainstream metal called Masters of Metal, a pointless collection of stuff you could find at any Kmart store: KISS, Scorpions, Y&T. This comp was absolutely everywhere, and similar cash-grabs followed: among the slew were New Metal Monsters (Mr. Big, Enuff Z'nuff) and Metal Masters (Pat Travers is a metal master?).

Independents like Metal Blade did something similar, with more useful results: the three-part Best of Metal Blade series was a necessary buying guide, helpful in sorting through the masses of releases coming out at the time (and it helped you stay away from junk like Krank). The release of compilation series' continued into the '90s and 2000s, some worthwhile, others not at all. And then there's Nuclear Blast's all-ballads Metal Dreams series. Don't get me started on that one.

Due to the amount of junky comps, "compilation" became another word for "crap" to a lot of collectors. A few of them, however, are mandatory.

The compilations featured below belong in the library of every serious metal aficionado. Some contain material that was exclusive at the time, others provided definitive overviews of a particular movement that landed at the right time. Earache's Grindcrusher, for instance, came in 1990, right in the middle of the first death metal boom, and for a lot of people it acted as a soundtrack for the era. All of these did that in their own way, or turned people onto a movement from earlier years. 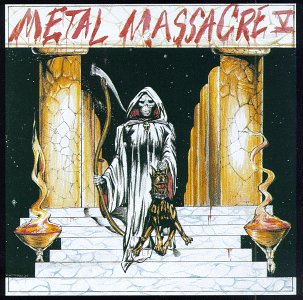 When you think about the words "heavy," "metal" and "compilation," it's Brian Slagel's Metal Massacre series that first comes to mind. It needs no introduction, and it doesn't bear repeating, but it's fun, so: this was the compilation series that officially introduced the outside world to Metallica (or Mettallica, as it was spelled on the first pressing), Slayer, Trouble, Voivod, Fates Warning, Hellhammer, Possessed and many more. If I had to pick a favorite installment, it's #5. You cannot beat it: demo-era tracks by Omen, Voivod, Fates Warning, and Metal Church, and other highlights like Future Tense, Attacker, Overkill, and a really great song by Jesters of Destiny. (Everything else J.O.D. recorded was inferior to the eccentric genius of "End of Time.") The tracks by Metal Church and Overkill are sub-par compared to successive recordings, but man, so much good stuff here. Metal Massacre VI (Possessed, Nasty Savage, Hallows Eve, Dark Angel) is also fantastically good. 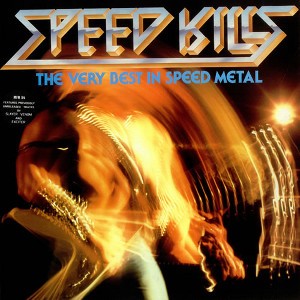 While installments II and III are fantastic, the first Speed Kills is perfect. Just as Grindcrusher defined the zeitgeist of extreme metal circa 1991, Speed Kills does the same for 1985. It is quite literally flawless. Metal Forces writers Dave Constable and Bernard Doe expertly frame the then-new thrash metal phenomenon in its proper historical perspective on the back cover, but all you need to do is play this loud as hell and lose your mind in the mayhem: Hallows Eve, Exodus, Destruction, Bulldozer, Metallica, Slayer, Possessed, Exciter, Venom, Voivod, Megadeth, Celtic Frost. Good times. The Slayer track, "Evil Has No Boundaries," is a live, previously-unreleased version; the Exciter track, "Riders from Darkness," never appeared on any Exciter album; and the Venom song, "Black Metal," is a different version than the more widely-known one. Yep, 1985: those were the days. 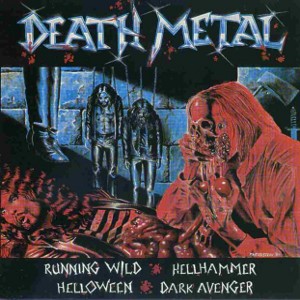 Even if only one of these bands could seriously be considered death metal by today's standards, each of the four here (represented by two songs each) might as well have been lumped under the death metal umbrella back in '84. After all, it was a new term then, and everyone was still trying to figure out what it all meant. We all know the first three bands: Hellhammer imploded and restructured as Celtic Frost; Helloween went on to more melodic pastures, designing the Euro power metal blueprint; Running Wild found piracy more appealing than necromancy by their third album and pumped out countless albums in that vein; Dark Avenger? Well, the two songs here aren't very good. They recorded an even lesser demo in 1986 then disappeared. Their stuff here is raw, galloping, thunderous traditional metal with crappy vocals. Not remotely "death metal" even in 1984. But the stuff by Hellhammer qualified -- one of the freakiest metal sounds in the world at that time. And you can never lose with early Running Wild and Helloween. Note that this compilation holds a non-album Helloween track, the oddly-titled "Oernst of Life." Oernst it up, you headbangers, oernst it up! 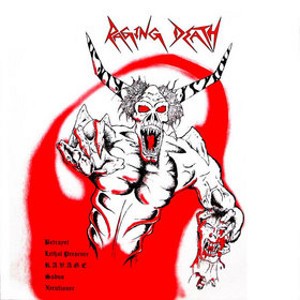 What a difference three years makes. Between 1984 and 1987, there was a bona fide DEATH METAL movement happening. It took root in various places, but it still drug the corpse of thrash along in its wake. By the end of the decade, it fully separated itself as an even more intense and guttural extreme metal specimen. It was especially vibrant in Scandinavia and, go figure, Florida. Two of Florida's earliest death metal bands are represented here in their earliest incarnations: Xecutioner and R.A.V.A.G.E. They would become better known as Obituary and Atheist, respectfully, but on Raging Death they are heard with two tracks each under their first names. The other notable band here is California speed/thrash/death force Sadus, represented by the vicious "Kill Team" and "Twisted Face." The other two bands aren't quite as interesting or deathly -- Canada's Lethal Presence and San Francisco's Betrayel both sit firmly on the thrash side of the tracks. It's worth noting that Borivoj Krgin (now known for his extremely popular Blabbermouth site) was instrumental in putting this compilation together, and Toxik's Tad Leger provided the cover art. 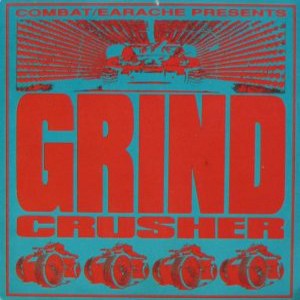 WOOOARRRRGH!!! I used to freak my retinas out staring at the construction orange and turquoise cover while blasting opening track "Chapel of Ghouls" (Morbid Angel). And the hits just kept coming: Repulsion, Carcass, Terrorizer, Napalm Death, Entombed, Nocturnus, Bolt Thrower, Carnage. Naturally, being an Earache comp circa 1990, the death metal is interspersed with lots of hardcore, grindcore and other –cores, much of it complementing the deathlier stuff (Filthy Christians, Intense Degree, Sore Throat, Unseen Terror). And then there's the truly whacko stuff, which gave even more depth to the listening experience: Naked City, Old Lady Drivers, Spazztic Blurr. All songs were available elsewhere, nothing exclusive, but it still rules. Golden times and earaches all around.

***Roadrunner's At Death's Door, also released in 1990, is second only to Grindcrusher when it comes to compilations that represented the zeitgeist of the early '90s death metal movement. Like Grindcrusher, At Death's Door compiled already-released material but worked as an entirely listenable document. Including the likes of Pestilence, Sepultura, Deicide, Morgoth, Obituary, Malevolent Creation, Atrocity and others, it deserves mention.*** 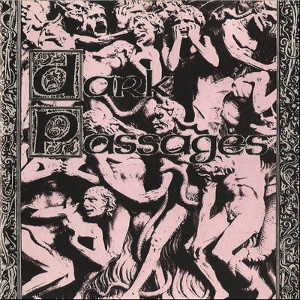 The fifth-ever release on Lee Dorrian's then-fledgling Rise Above label is to doom what Grindcrusher is to death: an authoritative declaration that this is happening now and this is something that will not go away. In 1991, death metal was already moving into the upper echelons of recognition while doom remained the real black sheep of the underground. There were lots of doom bands around the globe in 1991, but this compilation publicly proclaimed the movement's unity, productivity and vibrancy. Dark Passages is a feast for those into snail-paced crawl and cathartic misery. From old-schoolers like Saint Vitus and Penance (the then-new mutation of Dream Death) to obscurities like Stillborn, the highlight here is actually what was Dorrian's brand-new band, Cathedral. Their unspeakably morose "Mourning of a New Day" not only opens the comp, but ushers in an entirely new way of doing doom: slower, way way way slower than you'd ever heard it. Monumental. 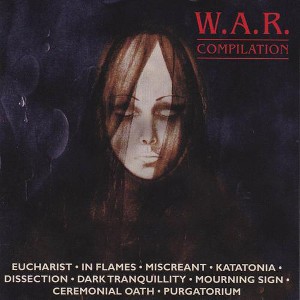 By the mid '90s, when plenty of know-nothings proclaimed that grunge had killed metal (you're just gonna make excuses and die?) there was a lot of exciting metal happening in mainland Europe. While Norwegian black metal was vibrant and Swedish death metal was trudging along brutally enough, there sprouted a whole new breed of bands, mostly in Sweden, that offered a more melodic, high-brow take on death/black ideals. While it was later dubbed (and got very watered-down) "melodic death metal," the bands on W.A.R. Compilation share a certain eclectic flair. Some of them are familiar names: In Flames, Dark Tranquillity, Katatonia, Dissection. Most of the material here was exclusive, and it's worth noting that the two Eucharist tracks are the best this short-lived band ever did. I will, in fact, call "The Predictable End" and "Wounded and Alone" some of the best metal ever. Add a few more bands onto the pile and you have an entirely listenable compilation and one that marks a particular and special era. 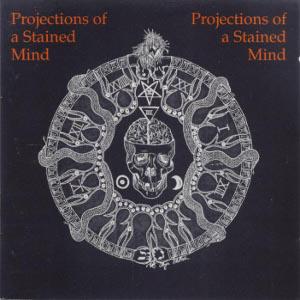 Kind of a precursor to W.A.R. Compilation in that this is also Swedish (minus one) and perfectly defines a moment in time. Some great bands here that blurred the lines between death and black (Tiamat, Grotesque, Mayhem) and others representing the utterly brutal Swedish death metal that made history and on which books were written: Entombed, Unleashed, Dismember, Nirvana 2002. Lots of cool obscurities too, much of them worthwhile: House of Usher, Macrodex, Traumatic. Even the booklet's band-per-page simplicity smells of legend. Yeah, you will wrest this CD from my cold, dead hands...or I'll trade it for the vinyl version. 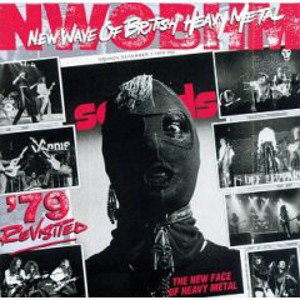 Although there are tons of other NWOBHM comps, either from back in the day or later anthologies, this one is still the granddaddy of them all. You can argue all night long with fellow 'heads over a pint of bitter about the lack of certain bands here (Legend? Deep Machine? Arc?), but you cannot deny that this compilation created more interest for the movement than it had since the wave petered out around 1983. That's a for-better-or-worse scenario, as it drove up prices on otherwise previously cheaply traded items like Mythra and Trespass 7 inches. But give due credit to Brian Slagel, Lars Ulrich and Geoff Barton for using their considerable powers to exalt this most important of metal movements. Highlights? Weapon's "Set the Stage Alight," Samson's "Vice Versa," Angel Witch's "Extermination Day," and Iron Maiden's "Sanctuary." The Def Leppard, Blitzkrieg, Gaskin and Diamond Head tracks are ace too. The CD added six more tracks than the vinyl, and the A-II-Z, Witchfinder General and Praying Mantis songs are worth a serious increase in volume, be it by slider, button or knob. Crank it!

***Respect to Heavy Metal Heroes and Metal for Muthas, both from 1980, and probably the best ones from the original era. Just please don't pronounce it Nuh-Whoa'-Bum!*** 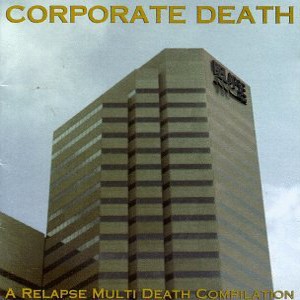 This one is notable not only for its completely dense wall of tracks that even the most dedicated death-freak might not be able to absorb in one sitting, but it's a pioneering compilation in terms of concept and packaging. Packaging is about the last thing even the best compilations have going in their favor, but this one was a total manifesto by the then-young Relapse Records. The skyscraper on the cover featuring a Relapse logo flying high on top; the liner notes detailing Relapse's "commitment to product superiority"; the pictures of the "executive officers" repairing a malfunctioning feeder arm on "one of the company's two X329sb state of the art compact disc packaging machines."

Tongue-in-cheek parody long before it was de rigeur, from the most extreme underground music label of the time. Genius. It fooled a lot of people into thinking Relapse actually had it's own skyscraper. The music? Twenty-nine tracks of total death/grind/hardcore/shit noise of the finest kind, including previously-unreleased tracks by Incantation, Mortician, and others, and brain-busting stuff from General Surgery, Disembowelment, Deceased, Macabre, Repulsion, Suffocation, Disrupt and so many others. They remain a label that truly cares "about giving extreme music fans high quality products." They still don't have a skyscraper, though.

Jeff Wagner is the former editor of the influential Metal Maniacs magazine and the author of Mean Deviation: Four Decades of Progressive Heavy Metal, an exhaustive history on the sound and its various subgenres.