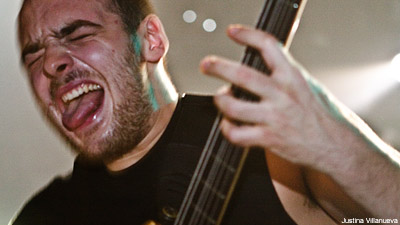 "We were supposed to play here last time with Summer Slaughter but there was a mortality in the family. So sorry if anyone paid to see us. Even though I'm sure no one did," Beneath the Massacre frontmant Elliot Desgagnés told Gramercy Theater on Nov. 28, when the band played with Dying Fetus and the Faceless. His statement was a bit modest considering the place was going nuts over the band.

Along with having some of the most monstrous breakdowns, Beneath the Massacre also had one of the angriest pits I've seen in a long time. (And by that I mean since this October's New Jersey Death Fest.) 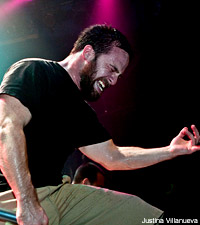 "This next one is about people who stage dive and walk on people's heads. I f---ing love that s---," Desgagnés said. With about month left of touring in the States, let's hope that the Canadians find time to make a follow-up to 2008's 'Dystopia.'

After getting to tour with brutal masters Dying Fetus and The Faceless, Beneath the Massacre is set to play one very wicked metal festival -- Neurotic Deathfest . The lineup includes Bolt Thrower, Carcass, Napalm Death and Origin. Neurotic Deathfest takes place in Tinburg, Holland from April 30 to May 1.

Beneath the Massacre Tour Dates
on TourTracker.com