Behemoth are reportedly working with uber producer Ross Robinson, who is perhaps best known for his work on nu metal releases by the likes of Korn and Limp Bizkit back in the day. "The day" being the late 1990s and early '00s. He also worked with Glassjaw and At the Drive-In, so his resume is much more extensive and dynamic than his most-discussed work.

The rumors of this partnership arose as a result of a Facebook photo posted by the Polish post-back metal band's frontman Nergal on Facebook, as well as a series of tweets issued by Robinson where he mentioned leaving Warsaw and that he would be working on some of the most ripping metal of his life in 2013. That's hint enough, isn't it? 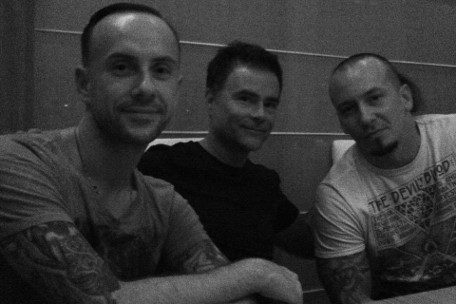 A Skylit Drive have dropped the lyric video for "Fallen" from their upcoming album due out in 2013. The album will be released jointly by their former label Tragic Hero and their current label Fearless. So it will be all hands on deck.

Lead vocalist Michael Jagmin of A Skylit Drive said the band is stoked about releasing the album between both labels since it offers them a "the best of both worlds" scenario. He also commented on the song, saying, "'Fallen' is about having the courage to look those who hold you back in the face, and telling them they can't bring you down any longer. It's about seeing passed all the bullshit, and fighting with every ounce you have to achieve what you want. It's the ultimate anthem for anyone and everyone that has a dream."

DevilDriver have been confirmed for a slot at the Wacken Open Air Festival for 2013. The event takes place in Germany in August. Meanwhile, the Dez Fafara-fronted band remains hard at work on a new album, which is due out in late 2013. Fafara also continues to book shows with his reunited band Coal Chamber. It's a busy time for the frontman! [Brave Words]

Otep will release a new studio album on Victory on January 22. It's called Hydra, and the singer has shared the handy-dandy cover art. It's literally quite handy and very red. [ThePRP]

Follow @Noisecreep on Twitter | Like Us on Facebook | Sign Up for Our Newsletter
Filed Under: A Skylit Drive, ASkylitDrive, Behemoth, ross robinson, RossRobinson
Categories: News
Comments
Leave A Comment
Behemoth’s Nergal Slams Majority of New Metal Albums for Sounding ‘Robotic’
26 Bands Who Sound Nothing Like Their First Album
Behemoth’s Nergal Is Serious When He Says ‘Don’t Start Any New Bands’ Right Now
Producer Ross Robinson on Why Korn’s ‘Remember Who You Are’ Backfired
Behemoth Playing Four ‘Opvs Contra Natvram’ Songs for Livestream From Warsaw Rooftop Landmark
Rock + Metal Bands That Played Over 150 Shows in One Year
Behemoth’s Nergal Names 21st Century Metallica Song That’s ‘One of Their Best Ever’
Behemoth Drop Video for Up-Tempo New Song ‘Off to War!’ From Upcoming Album
10 Funniest + Most Clever ‘Metalocalypse’ References to Metal Bands + Culture