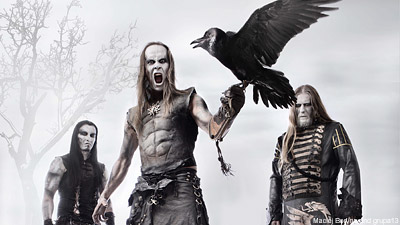 Did Behemoth frontman Adam 'Nergal' Darski offend Roman Catholics in his native Poland when, in 2007, he called the Catholic Church "the most murderous cult on the planet" before tearing up a Bible on stage during a set in Gdynia? According to reports, he most certainly did. Nergal has been formally charged with "insulting Roman Catholics," a crime punishable in Poland by two years behind bars.

Nergal is pleading not guilty to the charge, which stems from the 2007 incident. It was the desecration of the Bible that attracted the attention of Ryszard Nowak, who heads the All-Polish Committee for Defense Against Sects. Nowak later sued the band for promoting Satanism. While an expert witness on religious matters testified the act of destroying the Holy Bible could offend somebody's religious sensibilities, the case did not proceed because Nowak was the only party privy to the suit, and thus the only person on record who was offended.

According to Polish law, two formal complaints must be filed before charges can be brought against a defendant. Reports claim Nowak's complaint was made in 2008, and that recently, an unspecified number of other complaints had been filed.

During the first hearing, Darski stated under cross examination that what he does on stage is art and that his actions were not intended to offend anyone. Yet an expert on religious history and studies from Jagellonian University in Krakow has testified that every copy of a Bible could be considered a religious symbol. There was no judgment ruled against Darski as a result of the first hearing, but since additional complaints have surfaced, the matter will now be heard by the courts.