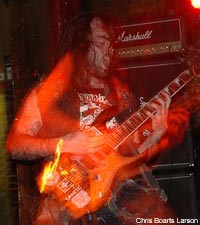 There's something rotten in the state of Virginia. The unassuming burgh of Richmond, Va. is home to such modern metal monsters as Lamb of God, Municipal Waste, and Gwar. It boasts a thriving underground scene that has proven to be one of the most interesting and potent on the East Coast.

RVA is an absolute hotbed of extreme metal and punk rock activity, with bands like Cannabis Corpse, Cough, Inter Arma, No Friends, Ravn and Battlemaster leading the charge alongside quickly-rising label Forcefield Records. Noisecreep tracked down Drew, the always affable fretboard wrangler from raging black metal tyrants Bastard Sapling, to hear the story behind one of Richmond's deadliest exports.

"The band started in the wake of me quitting Cannabis Corpse, living in a s--- hole and not knowing which direction I was going in Richmond. Black metal is in my veins -- it's the only thing I had to keep me sane," Drew told Noisecreep. "I was like, 'I'm gonna make some f---ing sick black metal, even if I have to do it myself!' Song ideas were recorded on a four-track in October of 2007. I played drums, guitar and did vocals on what was to become Bastard Sapling."

It didn't end there, though. Drew needed some other folks to put a full band together. "I ended up jamming with a drummer by the name Elway, who before we became good friends I'd heard was a total shredder and had been playing in bands since the early '90s. We rehearsed one time to feel it out, and a few months later he ended up becoming a full member," he recollects. "The vocalist joined the band shortly after we had our first two originals completed. Our vocalist is Mike from Inter Arma, and he was definitely the dude we had in mind while trying to get a full lineup for live shows/ the band. On May 20, 2007, we had our first show as a three piece, where we had two originals and did three covers -- Emperor's 'Wrath of the Tyrant,' Darkthrone's 'Under a Funeral Moon' and 'Deathcrush' from Mayhem. It was a good time and it definitely took people by surprise!"

Needless to say, things kept progressing from there, morphing into a five-piece act before it was all said and done. "We went on as a three piece for a few months until Shredder Steve (also of Inter Arma) joined the band. With almost a full lineup, we played a couple more local shows and eventually we had a good friend of ours come to our practice space and record a four song demo, which became our 'Raw Live Demo' that seems to be circulating on the internet already," Drew adds. "It came out just in time for the first Heart of Winter Fest that Elway and myself organized in December '08. Our bass player, Peter of Battlemaster, joined just before H.O.W., and the fest was his first show with us."

So what's next for Bastard Sapling, one wonders? "We have a split seven-inch planned with Infernal Stronghold to come out in the fall on Forcefield Records that is run by our good friend Tim. It will technically be our debut other than the live demo, It's gonna be pretty f---ing mean. After all that, it's writing time for our full-length. It's going to be over an hour and something of music so we'll see what happens with it!"