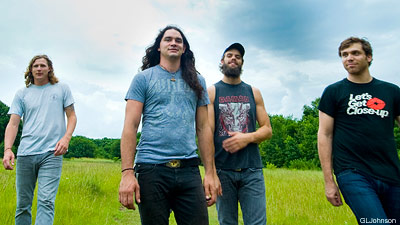 The Quietus is the sort of pop culture meta-rag that writes about what its staff finds particularly worthwhile, so it's no surprise that they recently interviewed John Baizley of Baroness about his artwork. With their latest release, 'Blue Record,' just out on Relapse Records, singer/guitarist Baizley is in a good place to promote his visually creative side, too.

"I like to speak, visually, in terms of metaphors and in terms of icons and symbols and avatars," says Baizley, "and I think that some of that recurring stuff is more for me to develop a narrative." Somewhere between Sailor Jerry, stained glass and the Renaissance lies the amalgam of Baizley's presentation, which is as intricate and magnetizing as Baroness' well-crafted style of metal.

While his style is very different from Jacob Bannon of Converge, he's just as much of a multi-faceted artistic force to be reckoned with. In addition to Baroness, Baizley has created album art for many other popular bands in the independent metal scene, which include Kylesa, Pig Destroyer, Darkest Hour, Daughters and Torche.