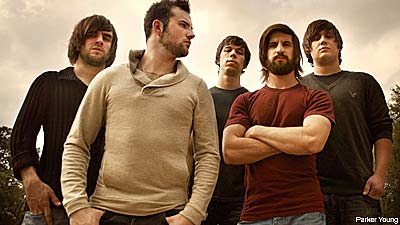 August Burns Red are preparing to embark on a 40-date, 38-city tour supporting A Day to Remember. The tour kicks off on March 31 in Ft. Lauderdale, Fla. and runs through May 16 at the House of Blues in Orlando, Fla. For such a tightly-routed tour with nary a day off, ABR guitarist JB Brubaker told Noisecreep that "the three things I have to pack in my suitcase are two pairs of jeans, a hoodie and lots of underwear!" As for his absolute essentials? "My Blackberry, my toothbrush, my passport," he said. Touring isn't 'Survivor,' where you can only bring one luxury item. The tour knapsack has room for plenty of crucial items.

Brubaker also said, "We are so pumped to hit the road with A Day to Remember in April and May. It'll be our first time doing a full U.S. tour in a while, and we're pleased to be hitting up so many awesome cities and clubs. It's going to be a blast." His enthusiasm was evident. But he wasn't about to give any set list hints away, simply because it's too soon.

"Hmm, it's so far away to decide what we'll play," Brubaker said, "I'm sure we'll be busting out a bunch of jams on 'Constellations,' especially 'Mariana's Trench' and 'White Washed.' I think those have become ABR set staples. 'Messengers' tracks like 'Composure' and 'Back Burner' need to be in there as well. Who knows, 'Thrill Seeker' might even get some love." Brubaker wasn't being coy; we believe the band hasn't hammered out which songs from those three albums will be rendered live in the next few months.

With the shows booked back-to-back, Brubaker isn't worried about the grind of a show a day or about having to kill time inside the venues, since there is less time for touristy, sightseeing endeavors. "I think we'll actually have a decent amount of free time on this tour," Brubaker said. "From what I can tell, the route is pretty great. We're excited to have some good hang time in Atlanta, Chicago, N.Y.C. and Southern California. There is always lots going on in those places. At this point, we don't really do much sightseeing in the States, as we've been around the block quite a few times. I'm sure there will be lots of movie and TV show watching, hopefully many trips to Chili's and Denny's and lots of entertaining hangs after the shows."