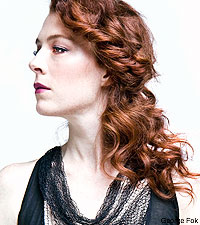 Melissa Auf der Maur considers herself "the luckiest girl in the world." The solo artist and former Hole bassist lured Glenn Danzig to sing with her on 'Father's Grace' for her new MAdM album, 'Out Of Our Minds,' due out March 30.

"I wish I had a flag to wave this, or could wave this on my forehead every day, but this is the first and only duet of Glenn Danzig's entire career. I'm the only woman -- or man -- who has been graced with his presence on their record," Auf der Maur gushes. Yes, gushes.

You see, working with Danzig on the stirring six-minute 'Father's Grace' is the fulfillment of a childhood dream for Auf der Maur, now 37. "I will not let up if I have a particular dream, and I have wanted to do a duet with him since I was 17," she tells Noisecreep.

"My lucky sweatband that I wore throughout most of Hole was a Danzig patch sweatband, and I used to live in Los Angeles not too far from Danzig's home and drive by in my 1967 Cougar and would whisper [adopts girlie pleading voice], 'Please be my friend,'" she chuckles. "I wanted so bad to have Danzig in my life."

She's not insane or a stalker, but has huge admiration for the man with the distinct baritone voice, best known for his work in Danzig, Samhain and the Misfits, and explorer of every musical genre and art form, including comic books and film.

"I have a thing for Vikings, and I have a thing for Glenn Danzig," explains Auf der Maur, whose 'OOOM' project is also multi-disciplinary, encompassing a Viking-themed album, short film, comic book, art and live events. She is also a photographer.

"I've had years to analyze why I daydream about these warrior men [and that is] I have to hone in to those warriors in myself to do what I do. So I like to believe that there's a mini Viking and a mini Danzig living in my heart all the f---ing time, making me strong and giving me a fire to connect with people and rock out as hard as I can."

Auf der Maur had never before written a song for somebody else to sing. The lyric is a conversation between a gravedigger and a woman who has lost her father and through their union, he helps relieve her grief. Auf der Maur's own father, a prominent journalist and politician in Montreal, passed away in 1998.

"To tell a story with [Danzig] as the male character, I mean I've never written a blues funeral dirge in my life, but I did for him," she says.

Through a friend, who contacted Danzig's manager about her desire for him to duet with her, she was told, "'He doesn't sing on other people's records, but we know she has a thing for him,'" Auf der Maur recounts without a hint of embarrassment. "'All we can say is send the song, and if he feels it, maybe he'll consider it.'"

From her home in Montreal, she sent a copy of 'Father's Grave' to his P.O. Box with her taking on both singing roles, demonstrating to Noisecreep how she affected a deep voice for his part and accentuated her part in a super high voice "like a cartoon version of the song," she laughs.

"I didn't hear back for a while, and then one day an unknown number called my phone: 'Melissa, it's Danzig. I really liked your song.' And I am the luckiest girl in the world, and that's the end of the story."

In her mind, perhaps, but did she meet her warrior or just send files back and forth to him over the internet? "Oh, no. I went! Oh yes!" she gushes again. "Least disappointing hero I've ever met. That man -- most genuine, high-end integrity, more punk than anyone I've ever worked with or known. He sticks to his guns. He's such an inspiration and such a lovely, generous person. I had no idea."