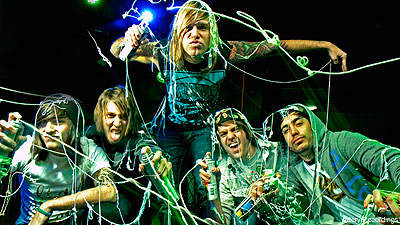 Killer Lyrics: Now that my secret's out / I have finally gone insane / All my evil schemes and master plans are playing out

Artery Recordings' Attila are a self-described "party metal" band from Atlanta, a city known for CNN, Coca-Cola and the Center for Disease Control. Those cultural icons probably don't play into the deathcore band's playful modus operandi, but considering Atlanta as an American Mecca for hip-hop might.

'Lights Out' is the second song released from the band's new album, 'Rage.' Besides switching vocal ranges throughout the song, vocalist Fronz (just Fronz) vacillates between the sober lyrical content of the deathcore subgenre and the 'get down and rock with us' aesthetic of crunkcore.

Even when Fronz spits rapid-fire, "Now everything begins to flash before your eyes," over a sparse, pounding breakdown, one gets the impression that Attila exist to simultaneously beat you in the skull and hand you a mixed drink.

Attila are currently on a nationwide U.S. tour with Drop Dead, Gorgeous, Sky Eats Airplane and Sleeping with Sirens to support 'Rage.'