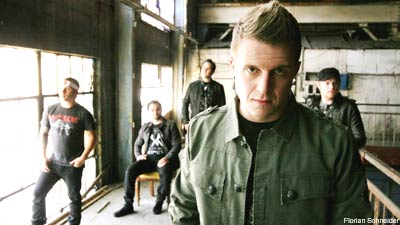 For California band Atreyu and Orem, Utah outfit the Used, history is about to repeat itself. In 2004, when the Used were touring for their second album, 'In Love and Death,' they invited Atreyu to head out on the road. Now they're getting ready to do it again.

"We were just starting to make a name for ourselves when we did that first tour," Atreyu drummer Brandon Saller told Noisecreep. "They were one of the first established bands to take a chance and bring a metal band out on the road. It really opened the doors for us to play to a lot of new people that would maybe never have been Atreyu fans if it wasn't for that tour."

The two bands make up for lost time when they head out together for the first time in over five years, starting January 28 in Anaheim, California. Dates are scheduled through Febr. 26 in Birmingham, Ala. You can bet this time that far more members of the audience will be singing along with Atreyu's songs since the two bands are now on pretty equal footing. The Used's fourth album, 'Artwork,' debuted at number 10 on the Billboard album chart in early September, and Atreyu's fifth offering, 'Congregation of the Damned,' hit number 18 in early November during its first week of sales.

"Before, not a lot of their fans knew who we were, so it was a little more of a challenge," Saller said. "Now, we've been lucky enough to have been around for a while, and I think we have a lot of the same fans, so it's gonna be a good show. Plus, they're great dudes and it's fun to hang out with them again."

Atreyu were so stoked about the idea of going back out on the road with their old buds that they actually put other plans on hold. "We had the option of headlining our own shows or doing this," Saller said. "We just decided that it has been a really long time since we've played with them, and that we had such a good time last time that we wanted to do it again."

Los Angeles punk band Drive A will open all shows.