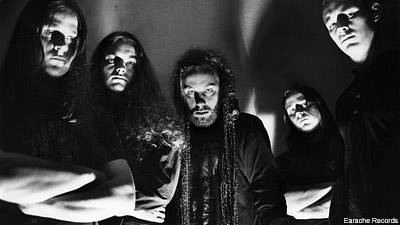 Before the Haunted and Cradle of Filth reached their peaks, various members were a part of At the Gates, a Swedish death metal band that disbanded around 1995. Just last year, they reunited for a one-off tour that was well-received around the world. 'The Flames of the End' is a special three-disc DVD set to be released on Feb. 22, and serves as a definitive piece of history for any long-time death metal fan.

The first disc is a documentary titled 'Under a Serpent Sun: The Story of At the Gates,' which was filmed and directed by guitarist Anders Bjorler and covers the band's entire career. "I started preparing for the documentary ... in 2007," Bjorler said in a recent press statement. "The downside to my filming plans was actually reliving all of the feelings associated with At the Gates ... We really appreciated every second of it because we knew that in a few months it would be all over."

The second and third discs are full of live footage. 'Purgatory Unleashed' is a 75-minute live set performed for over 60,000 people in 2008 at the Wacken festival in Germany, and 'Only the Dead Are Smiling' features over 25 various live performances between 1991 and 2008. "[The Wacken show] captured us at our finest moment," added Bjorler. It was just after the U.S. tour which was dubbed the Suicidal Final Tour in July of last year.

'The Flames of the End' marks the true end of the band's existence, and captures the high note on which things ended for all final five members. The set, coming out on Earache Records, will also include a 40-page color booklet.

Filed Under: At The Gates, AtTheGates, cradle of filth, CradleOfFilth, haunted
Categories: News
Comments
Leave A Comment
Back To Top