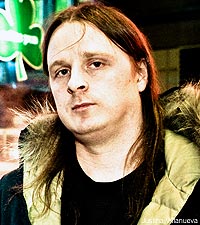 On Feb. 6, Noisecreep gate-crashed New York City's famed Brill Building like the hoodlums we are to attend Earache's invite-only screening for the new At the Gates DVD. The mammoth, three-disc set is entitled 'Flames to the End' after the haunting instrumental closer on their genre-defining classic album, 'Slaughter of the Soul,' and will be out on Feb. 22.

In addition to the band documentary, 'Under a Serpent Sun,' that was shown at the screening, the set will include a 75-minute DVD of the At the Gates' triumphant 2008 performance in front of 100,000 metal die-hards at Wacken Open Air, as well as a third disc of rare and archived performances from 1991 to 2008 that span the globe and include footage from their 2008 reunion tour.

Founding guitarist and principal songwriter Anders Bjorler was in attendance, and graciously sat down with Noisecreep to shed some light on 'Under a Serpent Sun,' which he filmed and directed himself under the At the Gates Productions banner.

"When I called Adrian in 2007 about reunion plans, he immediately said that we have to do a DVD," Bjorler told Noisecreep. "That got me triggered, and I based everything around an interview I had set up with myself on a tripod. I had worked from that as a base, doing the longer Tomas interview you see, and from that we interviewed all the separate members to fill in all the details.

"And, of course, all the video footage and photos tell their own stories as well. It's a big puzzle. I also changed up the continuity. In the beginning, I had a linear story. Then I changed it to have the Japanese reunion show at the beginning of the film. It took me six months to finish, and I am really pleased with it," he smiled.

The film is a must-see for any metalhead worth his leather. More than just a band documentary, 'Under a Serpent Sun' follows At the Gates from their very beginnings -- warts, pimples and all. From days spent playing in basements and nursing their all-consuming hobby of trading demo cassettes with fellow heshers the world over, the now-legendary Gothenburg, Sweden death metal scene was spawned.

Interviews with former members and scene luminaries like Niflheim, Dark Tranquility, Tiamat and many more help paint the blood-red picture. Vintage rehearsal footage from At the Gates' demo days will surely send shivers down any fan's spine, too. This film sees a handful of gawky teenagers slowly but surely craft one of the albums that truly changed the face of extreme metal as we know it, revealing the pressures and changing ideas that tore them asunder at the top of their game.

At the Gates will never record another album, will never play another festival or do another tour, but with 'Flames to the End,' the they are doing their best to ensure that fans are left with a fitting memory of a band that changed the metal world.

Downloaod At the Gates Songs
Filed Under: At The Gates, AtTheGates, Dark Tranquility, DarkTranquility, niflheim, tiamat
Categories: Interviews
Comments
Leave A Comment
At the Gates to Play All of ‘Slaughter of the Soul’ on 2022 Tour With Municipal Waste + More
50 Rock + Metal Albums Turning 20 in 2022
At the Gates’ Tomas Lindberg Thinks World Will Be Better When Today’s Young Adults Take Charge
At the Gates Share Sprawling Metal Opus ‘The Fall Into Time’ From Upcoming LP
The Best Rock + Metal Songs of May – Staff Picks + Essentials
At the Gates Release Dark New Song ‘The Paradox’
At the Gates’ Tomas Lindberg Explains Being a Schoolteacher + Metal Musician
At the Gates Unveil Dark Album-Opening Track ‘Spectre of Extinction’
At the Gates Announce ‘Very Dark’ But ‘Not Negative’ New Album ‘The Nightmare of Being’