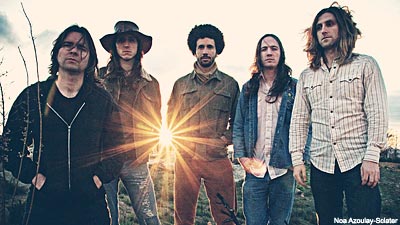 Crafting a full-bore concept album, complete with 17-minute epics, is a daunting task for any musician. To remain focused while following a thematic template is no easy feat. For prog rock forward thinkers Astra, who employ things like mellotrons, synths and flutes into their unconventional sonic stew, it was a beautiful mistake.

"We didn't set out to write a concept album," Astra guitarist/vocalist Richard Vaughan told Noisecreep. There was no design, no grand plan, no rule to follow and therefore, the band couldn't reveal usable guidelines for getting all conceptual.

"It really came about by serendipity. A few years back, I was dealing with some pretty heavy medical issues where I was forced to face the real possibility of my own mortality at a young age. My lyrical songwriting from that period came effortlessly to form the theme of 'The Weirding' and served as a much needed outlet for me. [Multi-instrumentalist] Conor [Riley] was also dealing with some similarly heavy issues from a different point of view so his lyrical songwriting also added to the whole 'Weirding' concept. The dark nature of our instrumental music just seemed to come naturally to all of us. It was like all of these puzzle pieces were just falling into place and when we were done we realized our entire album had this common theme. We had essentially created a concept album." Like any quality conceptual effort, Astra prefers not to shed any light on the concept, keeping it intentionally vague, leaving the listener to unearth his or her own meaning.

Vaughan deemed the band's music as "sometimes heavy, sometimes gentle, always freaked" and for those who may be scared off by the 'prog' tag, Vaughan said, "We know what we like and don't like about prog rock and music in general. We like to weed out the self-indulgence and leave in a nice mix between cosmic atmospheres, intricacy and symphonic, melodic songwriting." He cops to being influenced by King Crimson, Genesis and Yes and that the live show features "attention to dynamics and space travel!" Who isn't all for leaving this earthly plane, if only transported elsewhere by the music?