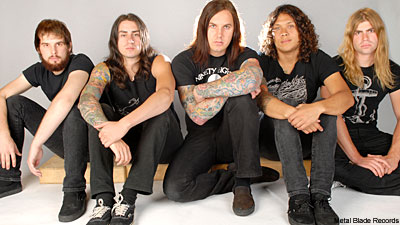 In some ways, As I Lay Dying's fifth album 'The Powerless Rise' goes out on a limb. In others, the thrash-fueled metal band from San Diego's latest disc, which was released May 11 on Metal Blade Records, hugs a comfort zone. The album's artwork once again came from Converge's Jacob Bannon, and production was taken care of by Adam Dutkiewicz of Killswitch Engage, who also worked on the As I Lay Dying's 2007 Grammy-nominated 'An Ocean Between Us.'

But singer Tim Lambesis tells Noisecreep that 'The Powerless Rise' isn't necessarily proving to be a familiar ride for the band's fans. This one, with its intricate mathy metal layers, he says, takes a few listens. It is, we conclude, that most rewarding of records, technically known as a grower.

So, you recommend fans and newcomers alike sit down and give 'The Powerless Rise' some time and space to reap the full sonic benefit?

With this type of album, it gets better with each listen. At least that's the feedback we've gotten so far from fans. The style of our music being so layered and so busy, and sometimes a bit technical, it's a lot to get on one listen. Listen two or three times and you'll get the different layers that we put into our music.

In March, you finished touring behind 'An Ocean Between Us' with a final leg through Australia, and in April, you started touring the new album -- even before it was released.

The idea is to tour as long as we can to support an album and stay home as long as it takes us to record a new one. Then we're back out on the road again. Since the band started, that's been the cycle over and over again. This time, for the writing process, we spent a little more time. That gave us an extra month or two at home. We try not to burn ourselves out, and at this point in our career, we don't need to rush the creativity.

Is that cycle of creative and then touring periods, what with their attendant highs and adrenalin rushes, addictive?

No, not addictive exactly. I would almost call it a love-hate relationship. When we're at home writing an album we can't wait to get out on tour. We love it. Then when we've been out a couple of months we get burnt out and miss home. Then we go home take a couple of weeks and feel great again. We try and have a couple weeks in between each tour nowadays.

Is it that thing of always wanting what you haven't got?

I think it's human nature to desire a balance in life. Even if I have too much of my favorite foods I get sick of them.

Were there any goals you hoped to achieve with the new record?

With every album of ours, the goal is to progress without going so far that our fans feel like they're listening to a different band. There's always some change, but only within the energy of the band. We try to maintain that and stretch things either side of it. Typically, with a metal band, when they think of changing things up, especially when they get to their fifth album, they tend to lighten up. All the great thrash bands from the '80s, they all lightened up after a while. With 'The Powerless Rise' we progressed by pulling ourselves in both directions. We've made some of the heaviest songs we've ever written for this. 'Beyond Our Suffering,' the opening track, is hands-down the most intense song we've ever written. Then there's a melodic song called 'Anger and Apathy' and the closing track ['The Blinding of False Light'] is very melodic as well.

Is it that balance thing you mentioned earlier?

Maybe; it could be.

Was there a reason for working with Adam as producer again?

It was a little bit of a comfort thing in that we knew what we'd get with Adam. We met 10 or 12 producers who could have done a good job, but it also would have been a bit of a gamble to shake things up. Sometimes that producer who shakes things up goes too far. We were also so happy working with Adam last time. We already had the songs written. The creative side is all us. With a producer, we're just looking for outside perspective and to keep the album moving. We already knew we wanted to switch things up, so we wanted a solid base of someone we knew.