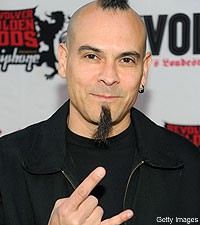 After Armored Saint released 2000's 'Revelation,' bassist Joey Vera kind of slipped out of the Armor-plated spotlight, but he remained busier than ever. "You might not have seen my face as much, but I definitely never went away. I've actually been busier than ever," he told Noisecreep.

Vera is a currently a full-time member of progressive Hartford, Ct. band Fates Warning and has been since 1997's 'A Pleasant Shade of Gray.' He also played on the 1998 live album 'Still Live' and continued with them for 2000's studio discs 'Disconnected,' 2004's 'FWX' and 2005's concert record 'Live in Athens.'

At the same time, he recorded two solo records, 2007's 'Jvera Concepts' and 2006's 'Chinese Fire Drill.' In addition, he produced or engineered albums by Seven Witches, Power Symphony, Engine, Redemption, John Arch, Frost, Steel Prophet, Jack Frost and Mother Superior. And Vera played on records by OSI and Tribe After Tribe and even joined Anthrax from 2004 to 2005 when Frank Bello briefly left the band.

"The 10 years went by super fast," he said. "John didn't leave Anthrax until 2005. And when he left, he didn't want anything to do with the music business for two years. And these are all the sum of the parts for why it took us 10 years to get back together and do another Armored Saint record."

Since their first release, 'Fistful of Metal,' four vocalists have recorded on Anthrax albums, including Bush. Did Armored Saint ever consider auditioning a new singer in 1992 when Bush accepted an offer to join Anthrax? "It was never even a consideration," Vera said. "His voice is just too familiar. He's just too big of a part of the band and the sound and the style. I never for once thought to replace the singer and I never would."