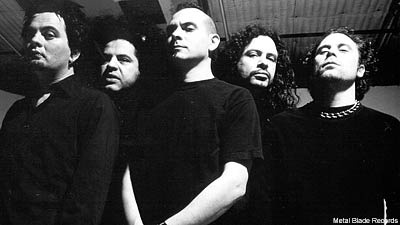 In early 2008, when vocalist John Bush and bassist Joey Vera sat down and decided to write some new songs, they had no intention of recording an actual Armored Saint album. They just wanted to rock out.

Bush was just getting back into music, following his painful departure from Anthrax in 2005, and so he hooked up with Vera to have some fun and jam on a couple of new tunes. A couple quickly turned to a couple more and by the time autumn hit, the guys had a batch of new songs.

"We thought, 'Well, maybe we should do something with this or make it into something other than demos for us to listen to,'" Vera told Noisecreep. "That's when we decided we would gear it more towards becoming an Armored Saint album."

The musicians contacted the rest of the band -- guitarists Jeff Duncan and Phil Sandoval and drummer Gonzalo 'Gonzo' Sandoval -- and everyone agreed the time was right for a follow-up to 2000's 'Revelation.' And that's just how they approached the creation of their new album 'La Raza.'

"We said, 'Let's put out of our minds how music has changed over the last 10 years," Vera said. "'Let's put out of our mind the fact that there are a lot of old school fans that are going to be watching us and curious to see what we're doing. We can't feel obligated to try to keep up with the times or write "Symbol of Salvation" Part 2. We don't have any obligations to anyone except ourselves.' So our main focus and goal was to write good songs. This is just a representation of how far we've come as songwriters."

Armored Saint continued writing until August 2009, when they entered a studio owned by their friend Bryan Carlstrom, who had worked with them on 1991's 'Symbol of Salvation.' Vera, who has produced every Armored Saint album since 1988's 'Saints Will Conquer' as well as albums by Seven Witches, Steel Prophet and Frost took the helm and Carlstrom engineered and mixed.

"It's strange to be the producer and also the main songwriter because we had been writing for about 14 months and you get really attached to the demos," Vera said. "I always make pretty elaborate demos as if they were a record. There are lots of overdubs and a lot of parts and they're mixed and there are effects. So you get kind of married to it. And redoing it all over again is a little bit emotionally challenging. But we just went in and pretty much tried to duplicate what was in the demo. But at the same time there are certain areas I wanted to be more over the top, so it was a little weird. And we were a little burnt at the end because we worked 12 to 14 hour days, but in the end it was a good experience because the results are satisfactory."