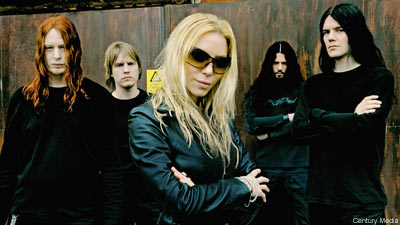 On Sept. 29, Swedish melodic death metallers Arch Enemy will release their eighth album, the appropriately-dubbed 'The Root of All Evil.' For guitarist Mike Amott, this forthcoming LP is a special one, as its comprised of reinterpretations of songs from Arch Enemy's first three studio offerings -- 1996's 'Black Earth,' 1998's 'Stigmata,' and 1999's 'Burning Bridges.' Arch Enemy plan to tour the hell out of the record, but have no plans to play gigs stateside until 2010.

But Amott admits, reworking the band's earliest material wasn't as easy as he figured it would be. "Me and my brother [Christopher] forgot a lot of the guitar parts from songs we haven't played in a long time, because some of these songs, we've never played live," he says. "We had no idea what the hell was going on, and so we had to go back and analyze that stuff. It was a little bit of work but it was fun."

The bigger question with the recording of this older material was Amott's fiancee, frontwoman Angela Gossow, who didn't join the band until 2001. But, as expected, Gossow proved herself to be one of metal's leading female figures, and sounds especially sinister on 'The Root of All Evil."

"It just came out of her in the studio," reflects Amott. "Every time we record, she sounds a little bit different, because we tour a lot, and that has an effect on the voice. She came out sounding really vicious on this one. We were wondering what it would sound like when she was singing the older songs that she didn't sing on originally, and she nailed it."

As to when Amott and Gossow will be tying the knot, the guitarist laughs. "That's an American thing," he explains. "We're going to live in sin forever."

While some fans may be disappointed that 'The Root of All Evil' isn't what you'd call a new record, fear not. Arch Enemy are writing new material at this very moment, and did 'Root' "to buy us some time." He says the band will mostly likely record their next studio offering in 2010, "but that won't see the light until 2011."

Of course, Amott recently played the last Carcass reunion show of 2009 in Moscow, Russia. He's not sure what the future holds for his seminal band, "but I've learned one thing, and that's to never say never." While his current focus is Arch Enemy, "the Carcass thing was amazing, and it was a lot of fun and it was great to celebrate the past and that music we made together in the 1990s. But nothing is planned right now, as far as taking it into the studio or anything."