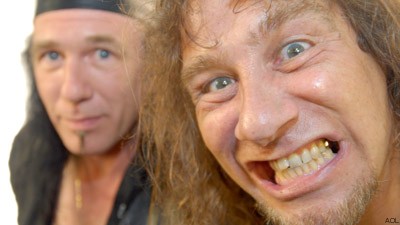 The documentary film 'Anvil: the Story of Anvil,' by Sascha Gervasi ('The Big Tease,' 'The Terminal'), is a heartfelt story of determination, perseverance and misfortune that chronicles Canadian metal band Anvil's 30-plus year struggle to battle anonymity and keep rocking. And while the critically acclaimed film -- which receives its TV premieres Oct. 3 on VH1 and comes to DVD Oct. 6 -- is touching and powerful. It's also as pretty hysterical, inviting countless comparisons to the 1984 Rob Reiner heavy metal spoof 'This Is Spinal Tap.'

Touchier bands might have been upset by the analogy, but Anvil, whose drummer is actually named Robb Reiner, have used the Tap thing to their advantage. "It's something that we discussed even before we were making the movie," frontman Steve 'Lips' Kudlow tells Noisecreep. "There was no way around it, so we decided to embrace it."

While making 'Anvil: The Story of Anvil,' Gervasi and the band repeatedly tipped their caps to the classic rockumentary. They never intentionally got lost underneath the stage, trapped themselves inside giant cocoon props or had a drummer die in a "bizarre gardening accident," but between happenstance and minor manipulations, they drew various parallels between their story and 'This Is Spinal Tap.'


"[Producer] Chris Tsangarides happened to have an amp that went to 11 that was inspired by 'Spinal Tap' to begin with," Kudlow says. "And when we were in England, well, might as well go visit Stonehenge. I mean, we couldn't help it. But keep in mind that ['This Is Spinal Tap'] was made to be as realistic as it could be about what we do, and here's the thing; It's a Trojan horse. The way society works, everybody wants to find something that they can pigeonhole something as, or find something that is relatable to something else, so that's how this works. It draws the people in, and then the Anvil drops on your head." 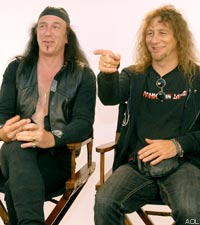 While they're not all covered in 'Anvil: the Story of Anvil,' there have been countless Spinal Tap moments throughout Anvil's career, including the time they were opening for Dio in Toronto and Kudlow revealed a little too much of his inner self.

"We were at a place called Massey Hall, and I used to wear a jock strap with a pair of tights," he explains. "I got up on stage and the jock strap broke and fell down around my ankles. You could see right through the tights, so I was virtually standing on stage naked."

Then, there was the time that Reiner came as close as he'll ever get to spontaneously combusting. "One night the lighting was so close to us, and the lights were 1,000 watts each," Kudlow says. "One of them was a little too close to the drum set and actually melted the plastic on the drums. And here's Robb sitting right beside it roasting."