A year ago, hardly anyone outside a small enclave of Canadians and '80s loyalists knew who Anvil were. Now, thanks to the excellent and heartfelt Sacha Gervasi rockumentary, 'Anvil! The Story of Anvil,' the band members are recognized in restaurants, on the street, even in cabs -- which is perfectly fine with them.

The acclaim they've received because of the movie has resurrected their career and granted them the kind of the stardom they spent over 30 years dreaming about. The band was recently handpicked by AC/DC to open three stadium shows, and they've just released their 13th record called, not so oddly titled 'This is Thirteen.'

''Creep Show' was only too happy to have frontman 'Lips' Kudlow and drummer Robb Reiner join in for this week's podcast, in which they reflected on where they've come from and filled us in on some of the things that lay ahead, including the DVD release of 'Anvil! The Story of Anvil,' coming next month. 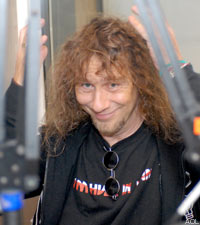 Our interview with Anvil was revealing, heartwarming and pretty damn funny, as was the rest of the program -- maybe minus the heartwarming part. Panelists for this week's ''Creep Show' were Revolver senior writer and Noisecreep contributor Jon Wiederhorn, lead blogger Amy Sciarretto and news reporter and writer Chris Harris. During the news segment, the panelists discussed Nine Inch Nails frontman Trent Reznor's decision to hammer the final nail into the touring coffin -- at least for a while -- and Motörhead's latest touring dilemma, which has forced them to go without drummer Mikkey Dee for a spell.

We also talked about Mastodon's role scoring music for the upcoming film 'Jonah Hex,' Firewind's Gus G playing with Ozzy Osbourne and whether recording again with Ross Robinson will help Korn regain some of the metal cred they've lost over the years. 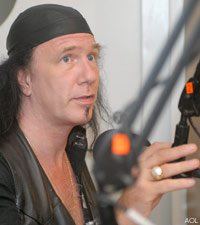 Finally, ''Creep Show' took a look at this week's biggest metal releases and concluded that Megadeth are flying high again with 'Endgame,' Shadows Fall have risen to top form with 'Retribution' and Every Time I Die are now less silly, but still completely demented. Panelists also offered their take on new records by Kittie, It Dies Today, Chthonic and Dying Fetus.

Remember, if you make it through the first 20 minutes of the show, you're in for a treat from Anvil. Not only do Kudlow and Reiner fill us in on how they finally made it to the top and discuss some of the many misfortunes they suffered along the way, they also talk about the making of their new album, provide some inside information about the bonus features on their upcoming DVD, fill us in on their upcoming book and much, much more. So, give Anvil the thumb hang and check it out.