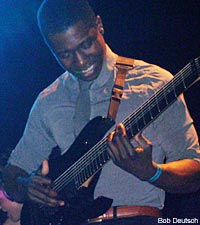 Right now, the name Tosin Abasi is on everyone's lips in the metal scene. The guitarist of Animals as Leaders is being celebrated by everyone from his tourmates in Darkest Hour -- who even called him the Steve Vai of this generation -- to the dude who runs his label, Prosthetic Records. So just who is Tosin Abasi, and is he excited, flattered, embarrassed by or blushing over all the accolades being throw his way?

"It's all of the above," Abasi told Noisecreep while on tour with Dillinger Escape Plan and Darkest Hour. The guitarist was well-spoken and alert, despite claiming to have woken up four minutes earlier to head to the band's Philly appearance. "It is awesome to hear people you've listened to for years to say they listen to you. As a guitar player, I've been striving for the same outcome for years and Animals, as Leaders is the closest I have come. It is a freak-out moment!"

Abasi plays eight-string guitars in this progressive, experimental and instrumental band, who released a self-titled debut last year. He offers a simple theory as to why people are embracing Animals as Leaders at this point, saying, "I guess I am using my years of practice for a result that is musical and that people connect with. The music has a lot of technical ability, but a lot of technical music is not musical; it's machine-like and contrived. What I am doing retains musicality, and I guess it's inspiring they might be moved by what they are hearing! They might be inspired to pick up the guitar."

The grunge era produced some of Abasi's guitar heroes. He admits that Nirvana, Green Day and Soundgarden are some of his faves. Then he started focusing on individual players as he got over, such as Paul Gilbert, John Petrucci and Steve Vai.

An instrumental band with an eight-string guitarist isn't commonplace in heavy metal, so Abasi broke down those differences for guitar novices and non-tech-obsessed readers! "Well, the traditional guitar has six strings, and we play guitars with extended necks and eight strings, which is a relatively new creation. Ours were handmade, and mine were made three years ago ... I was playing them before you could go to the store and buy them," Abasi said. He likens playing a six-string to only being able to play the middle keys on a piano, without being able to move from left to right. "An eight string opens up the whole left hand side," Abasi said.

Abasi also revealed that the band may appear on a big summer tour.