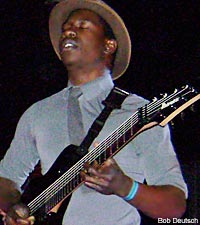 At the band's recent California live debut, Animals as Leaders garnered a triumphant cheer from the Hollywood crowd when the bands playing before the trio asked the crowd if they were ready for band's the mind-bending, instrumental take on metal. And on Feb. 7 at the Whiskey a Go Go, they certainly were, judging by applause.

While it was the band's first time in California, even nearly a year after the April 2009 release of its self-titled debut, Animals As Leaders has already put time in elsewhere across the US with the likes of Between the Buried and Me, Veil of Maya, Periphery, an appearance at last year's New England Hardcore And Metalfest, and eight string guitar wizard Tosin Abasi's time in the now-defunct Reflux half a decade back.

Since then, though, the album and the solo project-turned touring band has been a labor of love for Abasi, the band's leader by way of guitar solos and one brief moment on the mic just before playing Animals as Leaders' last song of the set. Heck, the man started recording riffs and such for what would become Animals as Leaders years before the album even saw a firm release.

Naturally, Noisecreep needed to know, then, how it feels for Animals as Leaders to finally come to fruition and get so much appreciation in so many cities they've only now just played for the first time.

"I had some riffs that would have been Reflux riffs for the next record," Abasi told Noisecreep. Elaborating, he also mentioned something about his former band's forward-thinking approach to their music when Reflux's 'The Illusion of Democracy' saw a 2005 release through current Animals home, Prosthetic Records. "Animals as Leaders doesn't have vocals, and working with Misha [Mansoor, engineer and guitarist in Periphery], so it's like a new package that we're kind of working. I guess ironic's not the right word, but some of the pieces, I wrote five years ago."

Regardless, Abasi told Noisecreep that shows supporting Veil of Maya had exceeded expectations. "It's been overwhelmingly positive, people seem super into it," he said. "It's kind of ... I don't want to say a surprise, but when you go a state or city for the first time and people already know your name, recognize you, and they know the songs. We're elated."