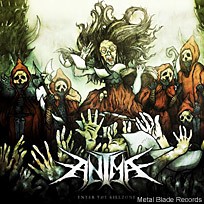 Germany's Anima make their Metal Blade debut with 'Enter the Killzone,' 12 tracks of death metal-inspired metalcore. Anima bassist Justin Schüler created the artwork, under his graphic design name, Black Night Studios (or 'Marek Schwarznacht' for those Noisecreep readers not up on their Deutsche sprache).

The cover depicts a crazed, long-haired and masked figure, flanked by two pairs of similarly masked (and armed) henchmen on either side, She (the figure appears to be female) is holding a large opened book in one arm, while the other hand appears to be flicking loosened pages of the book out into the outstretched hands in front of her.

Some comments on the band's MySpace page mention the similarity of the Schüler piece to the artwork of Baroness' John Baizley, but that may just be from the fact that it's an abstract watercolor. The other output from Black Night Studio -- mostly T-shirts and logos -- represent more diversity of mediums than watercolor. Some of his clients include Neaera, the Funeral Pyre and Deadlock.

Anima hasve select European dates in March and April to support the release.