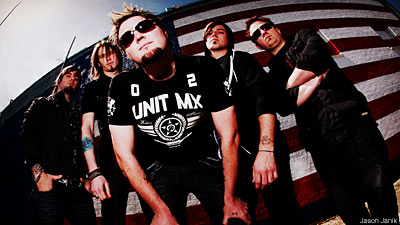 Dallas, Texas is home to many bands, including newcomers Anchored. While Anchored is a true baby band, forming just one year ago, the members are seasoned musicians, honing their chops in other national and regional acts. From inception to today, the band somehow found time to record their debut, 'Listen to This.' The songs are super polished, a fact no one in the band denies. In fact, they embrace their commercial sound.

"I always wanted to write at least one anthem-type song," Anchored vocalist Brandan Narrell tells Noisecreep on the band's tour bus outside a show in Dayton, Ohio. "I didn't think it would be the first single, but everyone who listened to it ... it ended up being the one that got chosen for us to do a video for."

Guitarist B.G. Simpson jumps in, saying, "It's an album you can listen front to back. Each song has different emotions. There's a couple really good rockers on there and then a couple where you can go to a lake, have a barbecue with some friends. It's a feel good album."

Narrell's past is heavier, less "feel good." He says he was called on by Damageplan as a possible choice for lead vocalist and also for Drowning Pool after singer Dave Williams' sudden death. Still, that past isn't deterring his present or future.

"The whole album is melodic," Narrell continues. "I sing 99 percent of the album. There's not one scream on the album. I don't have any problem having a commercial song. If a band doesn't believe in what they are playing or writing, why do it?"

The first single from 'Listen to This' is 'Dirty in Texas,' a phrase the band often shortens to 'DIT' For the guys in Anchored, DIT is more than a song -- it's a complete marketing scheme. In fact, the band hopes to capitalize on the popularity of the song and phrase and parlay that good fortune into many ventures including a DIT clothing line, chips and salsa, condoms and more.

Anchored recently completed a tour with Saliva. The band hopes to be on the road through November. 'Listen to This' is available soon via Trynd Entertainment and Music Group.