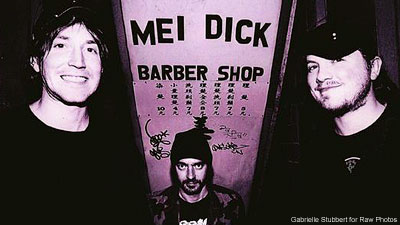 REUNITED AND BACK ON THE ROAD - After an abrupt break-up in 2002, West Virginia's original instrumetalists, Karma to Burn, have reunited and are hitting the road for a string of East Coast dates starting April 16 in Charleston, WV. In June they will head overseas for a European tour, including a stop at the Download Festival where they will share the stage with the likes of ZZ Top, Def Leppard, and Faith No More.

Noisecreep spoke to drummer Rob Oswald, who said of the reunion, "I am amazed and still unsure for certain that Will and Rich have survived the apocalypse, or lifting of the veil, if you will. I need to see this in person, and if I'm gonna go see it in person, I might as well play. But really, no differences need to be put aside, as I believe the differences helped to create Karma to Burn." What about some new music you ask? Well, according to their official website, "We are going to record and we are trying to figure out what to do label-wise right now," to which Rob added, "More will be revealed... stay tuned." Good news for Karma to Burn fans indeed, and if you failed to see them live the first go 'round, do yourself a favor and go see 'em. You won't be sorry.

IN THE STUDIO - Trance inducers Om have just completed recording basic tracks with Steve Albini at Electrical Audio in Chicago and are now working on the finishing touches. This will be the first full-length album featuring new drummer Emil Amos. The yet untitled release is expected via Drag City on September 8th, but if you can't wait until then for your Om fix, Important Records will be releasing the vinyl only 'Conference Live' on April 28.

DOOM, DOOM, AND MORE DOOM - Candlemass is offering their new album via a limited-edition box set. 'Death Magic Doom,' due on April 3rd, is now available for pre-order from Nuclear Blast. Peaceville has announced pre-order details for My Dying Bride's tenth studio album, 'For Lies I Sire,' and if that isn't enough to send you into a world of darkness and gloom, Khanate's posthumous release, 'Clean Hands Go Foul,' is now up for pre-order from Hydrahead. The album was recorded during the 'Capture and Release' sessions, shortly before the band broke-up.