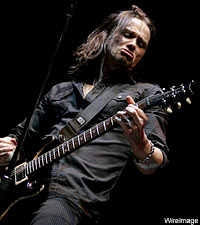 For the unassuming Kennedy, the surprise is less the company he keeps than just the fact he's a frontman. "It's funny I've ended up being a lead singer, because I've always been brutally shy since I was a kid, and that really hasn't changed much over the years," he tells Noisecreep. "So when you're in between songs and needing to connect with the crowd -- for me that's always the hardest part of the show. Singing part, playing guitar, that's the fun part, it's easy. It's ... in between tunes that scares the hell out of me."

He was reminded of that shyness recently when he sat down to watch the Alter Bridge 'Live From Amsterdam' DVD. "One of my Achilles' heels is with my stage banter. I have to be careful sometimes, because I don't always say the coolest things over the microphone," he admits. "I tried to crack a joke, and you can literally hear the sound of crickets in the audience. So we actually pulled that part out because it was too painful."

Having been around so many great musicians, is there anybody whose stage banter he really admires? "I saw U2 on the 'Achtung Baby' tour back in '92, and I was so captivated with Bono," he says. "He had this way of making an arena or stadium full of people feel like he was talking to them. I've seen things with Jack White, I think he's real funny and gifted in that way."