Melodic metal stalwarts All That Remains first erupted out of Massachusetts back in 1998, originally as a side project for former Shadows Fall vocalist Phil Labonte. Since then, they've sold over 800,000 records worldwide and have become one of the most-talked-about groups within our community.

All That Remains' sixth studio album, A War You Cannot Win, hits stores today. Produced by Killswitch Engage guitarist Adam Dutkiewicz, the album features some of the band's most magnetic songwriting, with songs like "What If I Was Nothing?" prime for a radio takeover.

Don't believe us? Stream the entire album here and hear it for yourself.

As All That Remains guitarist Mike Martin told Noisecreep, it may have been fate that brought him together with Labonte, as well as Dutkiewicz – who also happens to be his roommate.

You must be excited that the album is finally coming out.

I'm the most happy in the band, I think. We're always on such a deadline so it's hard to sit and say, 'I think it is amazing' while we're doing it. But looking at it now, it totally kicks ass. It's always the same time with us. We get a certain amount of time to do a record and we think that will be plenty of time, but it's never enough [laughs]. We are serious procrastinators, like a lot of other bands.

Whose idea was it to release the album on Election Day?

The label, I think. It's a cool idea, you know, to "Vote Metal." Phil will not argue with that – he's Captain Politics. Have you ever checked his Twitter? Man, and he has been through many phases. Today, I think he's at the redneck sort of thing – no government, a little more anarchy. Me? I'm a very simple person. I go to the gym during the day, play guitar and that's about it. Not too much with politics. I just keep my life simple at home with my roommate, Adam of Killswitch Engage.


You guys really live together?

Yup. The two of us have this big house, which is cool. Another buddy was living there for eight months but he moved out. Everyone thinks it's crazy, but it's the calmest thing you could imagine. We're two of the biggest OCD neat freaks ever – this place is so spotless it would make you sick!

The Internet has become such an important way to gauge fan response. Do you like that?

I do now. At first, it was like, I'd see a comment that would say, 'This band sucks' or something and so it took some getting used to; that instant sort of crack someone could make. But I've heard some really good things about our new single online and I like that.

Mike, was there a show growing up you saw that made a big difference in your life?

There were two. First, Metallica. I know, a typical answer for most guys in metal bands, right? It was in Hartford, Ct. and I was in the front row – freaking out –it was unbelievable.

The other show was bigger because it seemed more realistic to me. It was a hardcore benefit show one town over from where I lived. It was a free show to raise money – played over in Northampton, Mass. Shadows Fall and Aftershock played. I was just 18-years-old and it was like 500 kids in a small place beating the hell out of the each other – I thought I could do this – they got me so fired up. Phil was singing with Shadows and Adam was with Aftershock – and now look - I live with one and play with the other! 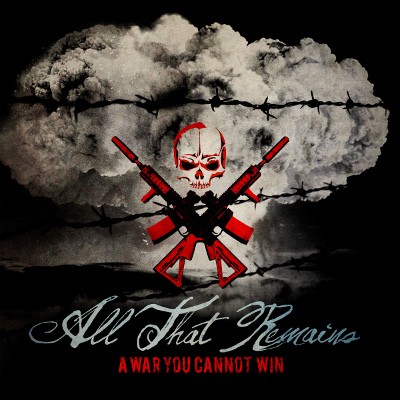 A War You Cannot Win is out now via Razor & Tie and available on iTunes, Amazon and all other retailers. Stream the entire album here for free!