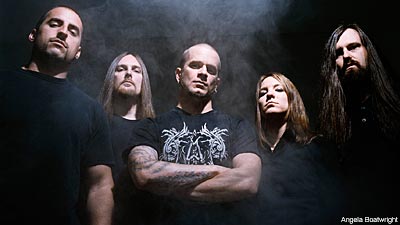 Massachusetts' metalcore masters All That Remains debuted a new video for their latest single, 'Forever in Your Hands,' earlier this week. Shot at this summer's Mayhem Fest stop in Washington, D.C., the video is directed by David Brodsky (Unearth, the Black Dahlia Murder, Suicide Silence) and features cameos by Adam D. and Joel Stroetzal of Killswitch Engage, Shannon Lucas of the Black Dahlia Murder, and Byron Davis and Doc Coyle of God Forbid.

The video will make its television debut on Headbangers Ball Oct. 19 when the band hosts the show, and it will be available on iTunes starting Oct. 13.

Fans can catch ATR on the hardDrive live tour with Lacuna Coil and Maylene and the Sons of Disaster now through mid-November. Immediately following this stint is a co-headlining run with the Devil Wears Prada on the Napalm & Noise Tour.

All That Remains Tour Dates