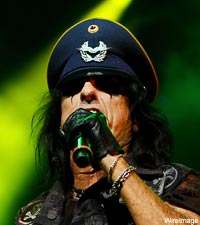 "Rock 'n' roll, to me, is an unreality. It's something that sort of lives in a fantasy somewhere because it should be that and when it stops ... when you know what Madonna is eating for breakfast and what Bruce Springsteen had for lunch, and what car he's driving and where he is every second, the mystery does go away," Alice Cooper tells Noisecreep.

Cooper clearly knows a thing or two about living life as a character. While Alice Cooper the man and Alice Cooper the act are two very disparate personalities, it seems both are in agreement that a little mystery is good in this day and age.

"I always wanted everyone to think that Alice Cooper lived in a big black castle somewhere on the side of hill. People find out pretty soon you're playing a character," Cooper further admits.

While shock rock and playing a persona for over four decades has been very kind to Cooper, he's quick to point out that the talent has to match the wacky ideas and behavior. Without talent, it's just another spectacle.

"I've always said, if you're going to go way out on a limb and have an insane image like Lady Gaga and do ridiculously, outrageous things, the people that succeed at that really have talent," Cooper mused. "I mean, look at Madonna. She did all the outrageous stuff, but she could sing. She was a great performer! If she got up there and she couldn't sing a lick, I'd go, 'Ok, this is a sideshow.' But, she can really sing."

So while Cooper is generous with his compliments and is quick to praise fellow talented musicians, he has few if any good words for the so-called stars of realty television. In fact, if you're a reality TV 'star' and you're reading this interview, here's some words of advice: don't go near Cooper when he pulls the guillotine onto the stage.

"I pick up People magazine and 'Kim and Ted' are breaking up. I look and I think 'Who are Kim and Ted?' Why do they have eight kids and why are these people stars?' You need to have a craft," Cooper said. "You're either an actor or a singer or something. People are celebrities now for having 10 kids, and I just don't understand why they get on the cover of People magazine. They didn't spend years honing their craft. All they did was have kids and argue! There's no talent there. There's no talent to what they do."

Catch the outspoken Alice Cooper on tour this summer. The band is booked for festivals including Wacken Open Air and Sonisphere.