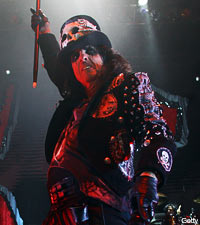 "It's going to introduce a new character that Alice is bringing up. It's going to be a character ... an unusual character, but he's going to be interesting," shock rocker Alice Cooper tells Noisecreep of his upcoming album. Cooper already has a handful of songs ready. While he wouldn't reveal the title just yet, it's clear the album will be signature Alice Cooper.

"On the last one, it was a story of a serial killer, 'Along Came a Spider.' He was certainly an inept serial killer. He had all sorts of problems that kept him from being the Hannibal Lecter that he thought he was, so it had a sense of humor to it. I think in all of my songs, you'll find a certain sense of humor. I don't like to do horror for horror's sake. I think you do horror if you can play it against comedy," Cooper said.

While Cooper has been horrifying audiences for years and years now, it's easy to see how comedy is a logical part of the show. After all, it's not Cooper's fault the world is less easily scared than in decades past. By mixing horror and comedy, Cooper can shake up his shows and keep fans entertained.

"It was pretty easy to shock an audience back in 1968, because everyone would be shocked by a snake on stage and by a guy named Alice who wore makeup -- all of that was very shocking," he recalls. "The idea that urban legend really played into sort of the mystique of Alice, the legend of Alice. But it's the same thing with Iggy [Pop] and Jim Morrison and anybody. There were so many stories about us, and you didn't know which ones to believe, so you believed all of them. That was part of the charm I think of having a character like Alice. We never denied anything -- even though we didn't do it a lot of times -- we just didn't deny it!"

Look for Alice Cooper to tour Europe, Canada and more regions over the summer. No release date has been announced for the upcoming studio album.