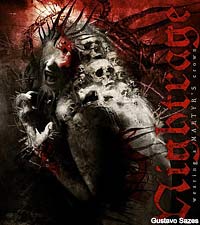 "Well, first I have to say, I'm a great Nightrage fan so doing that cover was really cool," graphic designer Gustavo Sazes told Noisecreep. "Marios [Nightrage guitarist] just sent me the title and said ''Do it killer, man!'" Sazes has done design work for bands such as Arch Enemy, God Forbid, and Old Man's Child, and it speaks well of Nightrage's quality of music to be included with such heavy-hitters.

Sazes, whose specialty is photographic illustrations, took a look at the designs of Nightrage's discography before beginning work. "I was aware of the other covers and I really wanted to take Nightrage to the next level with a new concept," Sazes continued explaining. "I think the main aspect that represents it is the weird position of the logo and the abscence of a 'central' figure, like the previous ones."

The artwork is a representation of the album's title, where an agonized, slightly disfigured Christ-like figure (the model is actually female) displays the skulls on her back. Sazes thinks that some may not pick up on the deeper meaning so easily. "About the theme...I think my concept is a bit personal. Maybe every fan will look and name my steps on that art. But, well...I think its far simpler: if you are a martyr, wearing a crown, how many deaths would you carry on your back? Just look at the cover and you can feel that easily."