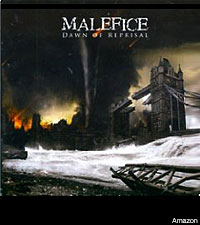 Fictional London - and perhaps the entire world - gets its comeuppance on the cover of the Malfice album cover for 'Dawn of Reprisal.' The broken steel in the foreground and the ominous glow of fire in the background almost max out the sense of catastrophe.

"I'm not sure whose the initial idea was," Colin from Rain Song Design told Noisecreep. "But we decided it'd be cool to have something recognizable on the cover, and London was the natural choice so it was just a case of choosing the appropriate landmark to destroy."

Colin continues, "I think London is full of buildings and structures which are universally recognizable and I suppose the obvious choice would have been something like Big Ben but I figured this has probably been done to death, and I wanted the cover to have it's own stamp. It's kind of a culmination of the entire layout with floods, hurricane, fire etc. All the things that appear individually in the booklet. It was quite enjoyable to take something which a lot of people work around or walk past everyday and rip it apart, so hopefully it'll grab peoples attentions."

Homework: Many artists use a corroded or stressed Statue of Liberty as a political metaphor. What kind of statement does a besieged London make?

Filed Under: Malefice
Categories: News
Comments
Leave A Comment
2010 New England Metal and Hardcore Festival Details Announced
Judas Priest Will Actually Be Performing at Rock and Roll Hall of Fame After All
When Slipknot Were Held at Gunpoint By Police + More Things We Learned During Corey Taylor’s AMA
Corey Taylor Reveals Which of His Slipknot Masks Is His Favorite in Reddit AMA
Study Suggests Straight Male Extreme Metal Guitarists Are Trying to Impress Other Straight Men
Ronnie Radke Calls Out Eddie Trunk Over Missing Laptop Comments, Sebastian Bach Fires Back
Co-Director Didn’t Want Ronnie James Dio Documentary to Feel Like a Wikipedia Entry
Slipknot’s Corey Taylor Reveals the Job He First Wanted Before Becoming a Musician
Judas Priest Has 40th Anniversary of ‘Screaming for Vengeance’ on Mind for Fall Tour