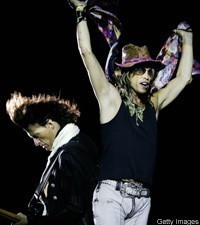 Forget all the rumors about Aerosmith parting ways with Steven Tyler and replacing him with some other big name rocker, because no one wants Aerosmith without Steven. Case in point: Aerosmith have just been booked for the 2010 installment of the U.K.'s Download Festival but only on the condition that Tyler and only Tyler appears as the band's frontman.

The festival, set for June 11 to June 13, will also feature an appearance by Rage Against the Machine.

Tyler, who is still undergoing drug rehabilitation for pain pills, said in a statement that "in the early days of Aerosmith, we were infected with the vibe coming out of the U.K. with the Yardbirds, Blues Breakers, Pretty Things and the Rolling Stones, and we wanted what they had bad. So baby, we're coming home. Rock and roll can be pure sex and we can't wait to Download ..."

Other rock outfits who've been booked for Download include AC/DC, Stone Temple Pilots, Deftones, Them Crooked Vultures, Megadeth, Motorhead, Wolfmother and Volbeat. More acts will be announced in the coming days.

"Download 2010 will be one for the history books. It will see the return of the world's greatest rock band to the most legendary and spiritual home of rock," says Andy Copping, a Download festival promoter. "We have been pushing for this moment for many years, but for this to become reality is the best 30th anniversary of the site we could have dreamed of, it's also going to be a fantastic tribute to Maurice Jones who started this all off back in 1980."