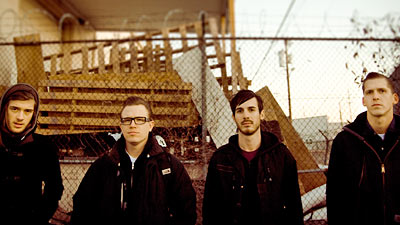 This week, Advent release their sophomore effort, 'Naked and Cold.' To the Christian hardcore quintet, the album is more of a feeling than a thought. "As we get older, the more alert we are, we see how cold the world is," bassist Johnny Smrdel told Noisecreep.

"We see how hateful the world is that we live in, including our own country. It kind of leaves you feeling naked: 'What can I do when there's all this hatred around me?' I feel helpless," Smrdel elaborated. "It really sums up the title. A lot of people have asked us what the story is behind the name. It's not really a story. It's a feeling. It's how we feel as we're getting older and more aware of our surroundings."

The album is named after the track of the same name. It was the third to the last song written for 'Naked and Cold.' "Joe [Musten], our vocalist, was writing lyrics, and he couldn't find a name for the song," Smrdel said. "We were talking about ideas and about the world and we said, 'That's exactly how we all feel. Dude, that is the perfect name for the album.' It gets your attention. It expresses kind of the whole feel of every song on the record. Especially being a Christian band, it may raise some eyebrows -- in a good way. It's definitely something that'll grab someone's attention."

The North Carolina-based band is hoping to capture listeners' attention on a tour that wraps up Sept. 12, as well. After that, Musten will step behind the drum kit to perform with the Almost on its jaunt with the Used.

"We finish up Sept. 12, and he leaves Sept. 13 through the middle of November," said Smrdel, a 27-year-old who, along with his wife, will become the parent of a baby girl in January. "Then he goes out again in January and again in March. We'll perform on weekends and do little things up until this summer when the baby's a little older and the Almost takes a little break.

"It puts us in a little hard position, but we've had to deal with it since we've been a band. We're all old and married. It was easy when we were like 21. It's definitely hard to tour. The older we get, the harder it is. But it's something we've got to do. We've got amazing wives who support us. We were in another band (Beloved) that toured full-time. We got a lot stacked against us, but a lot of stuff on our side, too. We love doing it. It's our ministry. We put as much as we can into it."

Live, Smrdel said, Advent is pretty simple. They don't use "crazy lights" or backdrops. Instead, the band -- which also includes guitarists Matt Harrison and Mike Rich, and drummer Chris Ankelein -- let the music do the talking.

"We play as hard as we possibly can," Smrdel said. "We don't try to be cool. These songs mean something to us, and there's a lot of anger -- good anger -- in the songs. I hope people like it. If we're on a big tour with a big stage, that's awesome. But we're more into playing the VFW halls and having everyone crowd around us. Everyone's energy is passing back and forth. That's the type of band we are."

One thing the band isn't: The type that gets up on a soap box and tells its crowd it's wrong.

"We have beliefs, and we have this hope that we want to share with you," Smrdel said. "If you want to take it, that's awesome. If not, that's awesome. That's fine. We grew up in a hardcore scene. Our shows are the one place you can come without getting laughed at; like in high school, because you look this way and felt this way.

"You can come here and see all these people [with a] big bunch of beliefs. They can come together as one and be a part of something that's bigger than us. People take it well. Sometimes they walk out. But we don't tend to preach per-se -- not that that's a bad thing. There's political bands that preach about political beliefs. There's bands that have environmental views, and they preach about them. I think you're open to say what you want on stage."