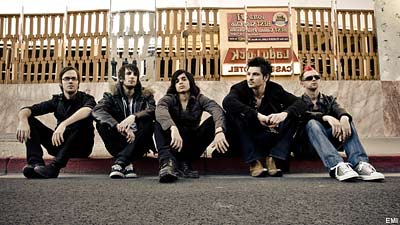 Looking back on 2009, Adelitas Way singer Rick DeJesus has so many unforgettable moments that he can't define the year with just one. "The first night we were on tour with Breaking Benjamin, playing in front of 5,000 people -- that was incredible," says DeJesus. "And seeing our song climb up the chart. And meeting people every night and hearing them sing 'Invincible' to us. There were so many moments like that, I just can't pick one."

With a year as enormously successful as 2009 was for Adelitas Way, it's hard to blame DeJesus for his indecision. The Las Vegas-based band's self-titled debut was released on July 14 and spawned the power rock hit single 'Invincible,' which was used as a WWE Superstars theme song and recently landed in the top five of Active Rock radio.

The band has capped off a stellar year by announcing a 2010 U.S. tour with Theory of a Deadman, which will kick off Jan. 18 in Minneapolis. "We're good friends with the Theory of a Deadman guys, and stylistically we're very similar," says DeJesus, adding that the tour will make stops in smaller locales like Norfolk, Va. and Sayreville, N.J. "There are a lot of zones in the U.S. that we haven't hit yet, and that's what we want to do here."

Adelitas Way, which just wrapped their trek with Breaking Benjamin and have previously opened for Chris Cornell and Hinder, seem to feel the most comfortable when touring behind their record and connecting with their unique audiences.

"Every night we meet some people who are shaking and crying in line before they meet us. Then there are the more aggressive fans who will butt in line and cause some trouble," laughs DeJesus. "Either way, it's just flattering. We always appreciate that kind of support."

The band will begin pushing 'Last Stand,' the reflective second single from their debut, to both modern rock radio and pop radio in an attempt to broaden their audience. Adelitas Way plan to spend most of 2010 on the road and pursue spots on larger tours with bands like Alice in Chains and Daughtry.

Although there are no plans to begin recording a sophomore record, DeJesus sees a tour-heavy 2010 breeding even more success for the band. "There's a lot of the first record that we can still show to the world," he says. "We're excited to see what the future holds."