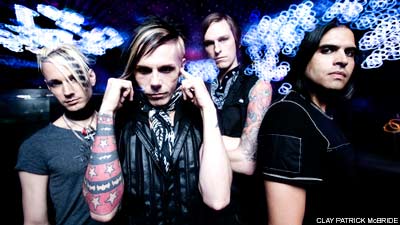 "The other day I bought two albums off iTunes, and I just feel like I got half the story," guitarist and singer Acey Slade lamented to Noisecreep. "It feels incomplete to me. I do think my albums are sort of like a book of works if that makes sense without sounding pretentious. To me, it's like having the physical format that tells the whole story. It's the packaging, the whole thing."

It might not be polite to say so, but Acey Slade has been around the musical block a few times. He's played in a slew of bands, including Dope, the Murderdolls, Trashlight Vision, Amen and more. He's toured the world, opening for some mega bands and honed his musical chops all along the way. Now, he's back with a new solo project called Acey Slade and the Dark Party. While quality songs are always Slade's first priority, interesting CD packaging is a close second. In short, Slade is a throwback, physical album kind of guy. When it came time to release 'The Dark Party,' deluxe was the only way to go.

"Even for me, I got the deluxe, downloadable version of the new Muse album ... I don't feel like I 'have it' as weird as that sounds," he said. "I guess there's people out there like me, and hopefully they will support it. Like our deluxe version comes with two albums, three EPs and a book. That's a lot. So even if you get the regular version, it comes with a bonus CD at minimum. Plus we also throw in stickers and guitar picks and s--- like that, too."

The desire to control packaging and make buying an album an event is what drew Slade to Trashpit, a U.K.-based record label. "The physical format isn't a dead media," he said. "There's still a couple people out there who like it. I feel like they need rewarded. Not only that, but I always liked the albums better that came with something extra, like the Kiss 'Love Gun' album that came with a gun or the Michael Monroe album that came with the tattoos."

While Slade loves to tour, don't look for him to hit the road behind 'The Dark Party' just yet. "I'm known for being a touring musician and I'm good at it: it's what I do. I feel like I'm on a run right now with writing. Most of the guys I'm writing with ... well, it's really hard to write while touring, especially when you tour at the level that we would.

"So, I've kind of decided not tour as much this year. It's not that I'm burned out or anything but I want to get some great songs in our arsenal and the guys I have my mind right now. We're in a really good writing mode. We should have a second album done by summertime," he said.