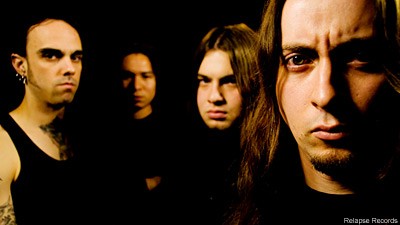 Los Angeles rockers Abysmal Dawn, which features Nuclear Blast's Charles Elliott, are purveyors of modern American death metal, and they will enter the studio with Hate Eternal's Erik Rutan in May to record their next album, which follows up 'Programmed to Consume.' Relapse will issue the album in the fall. For the new album, Abysmal Dawn welcome new drummer Scott Fuller to the fold.

The new album should be one built on vengeance or, at the very least, a 'living well is the best revenge' mentality, given the road the band has hoed to get here. "This new record is extremely important to us," Elliott told Noisecreep. "We've had lineup changes, people that have stabbed us in the back and others that turned their backs on us, and now this record needs to be our revenge. We've put a lot of hard work into these songs and have done more pre-production for this record than ever before."

Hopping into the recording booth with Rutan is a "huge step up," Elliott also said. "The songs we plan on sending him will be, without a doubt, our catchiest yet most extreme material yet. This will definitely be our defining release, and anyone that's a fan of extreme music should f---ing love it or there's something wrong with them [laughs]. We look forward to getting out there and playing some shows again soon after as well. It's been too long."