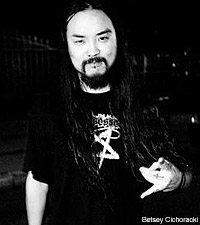 Last week the folks at Relapse Records announced that they would be releasing the debut EP by Abraxas. The old-school styled death metal band features Makoto Mizoguchi (Pyrexia, Hate Eternal) on guitar and bass, Mike Hrubovcak (Monstrosity, Vile) on vocals, and Lance Wright (Vile) behind the drum kit. 'Wretched Existence' will hit stores on Dec. 15 and will surely appeal to fans of bands like Malevolent Creation and Morbid Angel.

Noisecreep spoke with Mizoguchi about Abraxas's quick ascension and which death metal albums he thinks every fan should have in their record collections.

You formed Abraxas in May 2009 and things have moved fairly quickly for the band. How did you hook up with Relapse Records?

Well, actually my singer Mike told me that Eli from Relapse Records might have interest in the Abraxas songs when he talked to him few months ago so we discussed the deal and here we are! We are grateful to see the release go through these guys! Also I knew Gordon Conrad from the label so that makes it even better (laughter).

You recruited Lance Wright (drums) and Mike Hrubovcak (vocals) to join you in the band. How far back do you go with them and did you have a definite stylistic direction for the group?

Well, so far this band have been around for seven months or so but I`ve known my singer Mike for two years and Lance for few months. I was auditioning drummers for this band when I started but sadly could not find the right one so I asked Mike about it, if he knew anybody. At first he couldn't think of anyone but a few weeks later he told me, "Oh, yeah, I totally forgot about Lance, he used to play with Vile." I called him up right way (laughter). So everything worked out very fast after Lance joined Abraxas. I always wanted to do like old school death/thrash band so it's a dream come true for me.

Can you tell us what we can expect from your forthcoming debut album?

Well, I would say that I`m a huge old school thrash metal fan so our up coming full length will be more in that direction but we will still retain the old school death metal feel. I think it will be interesting album.

How do you feel about the current state of death metal?

In my opinion all these new bands have too much focus on technicality and forget about writing memorable riffs. I love Necrophagist but it seems like a lot of newer bands style themselves after those guys. It's just my opinion. Overall speaking, bands like Suffocation, Sadus, Immolation, Malevolent Creation, and Monstrosity, will still be around which is awesome because those are some of my favorites.

Do you find yourself liking more of the American bands?

I always love American bands! Of course I also like a few bands from my original country Japan. I'm talking about bands such as Defiled, Hydrophobia, and Vomit Remnants. But yes, the American bands have more of a unique style than a lot of the European bands which is awesome. I love old school styled brutal music so I would say U.S. bands are the best for that.

For our younger readers, which death metal albums are must-haves for their collections?

There are so many albums that I would recommend to younger readers but here are a few.