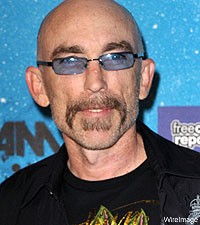 What would Freddy Krueger listen to when haunting your dreams and slicing you with his hand of knives? That question was posed to the actors from the upcoming reboot of the '80s slasher franchise with 'A Nightmare on Elm Street,' which hits theaters today.

Actor Jackie Earle Haley, who steps into Krueger's signature fedora and striped sweater, and Thomas Dekker, Rooney Mara and Kyle Gallner, who play the teens he terrifies, mused that the Krueg would rock out to Frank Sinatra or the more plausible Rammstein!

In this video interview with the cast, Haley says he plays drums and likes to play "harder stuff" and says he is listening Incubus and Linkin Park and that "Disturbed is awesome." The teens namecheck Norma Jean and Zao. So now we have even more reason to go see the film, which restarts the series we loved in our misguided youth!