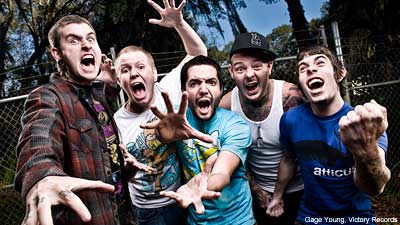 We've all been to shows with overzealous security guards, and we've all seen bands call out brutish security guards for being a little too rough with their fans. But A Day to Remember frontman Jeremy McKinnon set a new bar for scolding security on Oct. 17 during the band's set in their hometown of Ocala, Fla.

After seeing two security guards punch a fan, McKinnon launched a verbal tirade against the sentinels for close to three obscenity-filled minutes, and told the two guards "go home to your f---ing trailer park." A fan shot video of McKinnon's vicious invective.

"These are my f---ing friends, this is our f---ing show, and you don't put your f---ing hands on one of these kids," McKinnon yelled. "It is not cool to disrespect security at any cost. They are here to protect you guys. They are here to make sure this show goes over right. And by all means, to the security guards who are doing their job, thank you so much for being a part of this. But those two a--holes were not doing their f---ing job."

The crowd wholeheartedly supported McKinnon's stance, and the singer wouldn't let up. "Nothing makes you feel like more of a man than punching a 16-year-old kid," he taunted. "This is bulls---."

Last February, A Day to Remember released its third album, 'Homesick.' It sold 22,000 copies in its first week, was produced by Chad Gilbert of New Found Glory and mixed by Killswitch Engage's Adam Dutkiewicz. A reissue is set for an Oct. 27 street date, with all of the original tracks plus acoustic renditions of 'Homesick' and 'Another Song About the Weekend.'

A Day to Remember Tour Dates
on TourTracker.com