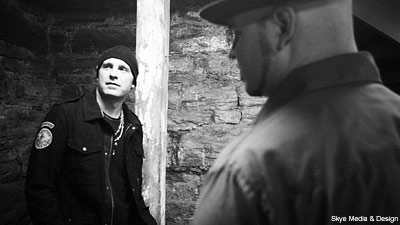 At home in southern Mississippi, 3 Doors Down's Todd Harrell is thrilled about the upcoming, self-titled debut release by his side project, 7dayBinge. The group features Harrell on bass, Jon Nicholson of the Muzik Mafia on guitar and vocals, Kenny Olson of Kid Rock's band on lead guitar and Shannon Boone on drums.

7dayBinge plan to release the album through digital download portals on Dec. 8, with hard copy release to follow on Jan. 26.

A side project by artists who just wanted to make some music together and not get bogged down in the business side of things, the band came together when Nicholson opened for 3 Doors Down on a European tour. Stops in Amsterdam found Harrell and Nicholson sitting down and working on some music together -- the result of the initial session, a track 'Cold Dark Grave,' worked so well that they kept writing together.

"The band started a couple years ago," Harrell said. "3 Doors was on tour in Germany, well, all through Europe. Jon Nicholson was opening for 3 Doors. Being out on tour, it was real close quarters. Me and Jon became good buddies and started writing songs in Europe on that trip. We had a lot of fun over there. For a couple years, we continued to write songs.

"Kenny and Shannon came into the band a little while back. Me and Jon had been writing songs. We decided to put together a band. Kenny was living in Nashville at the time, so was Shannon. Everybody runs into everybody in Nashville, so we asked Kenny and Shannon to come play on some songs. We put it together, started playing a few shows. It really feels good man. It's a lot of fun. We made a great record together. It's just one of those fun bands, man. It's a good time, rock 'n' roll band, man."

Harrell called Olson an "unreal guitar player." "His knowledge of the guitar is unreal. Kenny's a great dude. He's a lot of fun. He's one guy who's always fun to be around and a hell of a guitar player. He really fits the band.

"Shannon is the drummer in the band. He's just an all-around great guy. Great musician. He, too, is a lot of fun. Me and Shannon hit it off really good. It's a lot of good friends having fun and rockin' some ass."

Recorded over several days at the Sound Kitchen in Nashville and produced by the band, '7dayBinge' features eight driving, straight-up rock 'n' roll tracks The first song on the album, the also-eponymous '7dayBinge,' is a celebration of the music, Harrell said.

"When we all get together and write, it all seems to be about seven days or something," Harrell explained. "We always say we're writing and playing music on a seven-day binge. So that's kind of how that name came about. That song, I love that song. It's one kick-ass song. It's a lot of fun to play. It's just definitely a good representation of that band, the song."

The band plans to tour whenever 3 Doors Down and Kid Rock are taking breaks.

"Hopefully, we can catch a big tour or something this summer," Harrell said. "Who knows? 7day's even opened for 3 Doors."