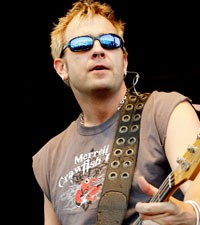 Todd Harrell, bassist for 3 Doors Down, was arrested Thursday morning in southern Mississippi and charged with "DUI-other," or driving under the influence of a substance other than alcohol, Loud Wire reports.

The "Kryptonite" rocker stands accused of driving his black Cadillac into an intersection and smashing into a silver Toyota truck driven by Darryl Thibodeaux, a 44-year-old man from Ocean Springs, Miss. Thibodeaux was taken to a local hospital, where he was treated for neck and back pain, and after posting $1,000 bail and consenting to have his blood drawn, Harrell was released from prison.

The DUI is the latest in a string of arrests for Harrell, who was charged with assault in 2002 and 2004 and disorderly conduct in 2005.