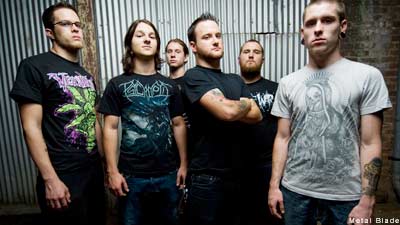 Deftones frontman Chino Moreno and Acacia Strain vocalist Vincent Bennett will make guest appearances on one of the most anticipated albums of 2010: 'A New Era of Corruption,' the new Whitechapel record, which was produced by Jason Suecof (Trivium, Job for a Cowboy) at his Audiohammer Studios in Orlando, Fla. The disc has been set for a June 8 release through Metal Blade, with a new track from the offering making its online debut April 12.

Bennett appears on 'Murder Sermon' while Moreno lends his pipes to 'Reprogrammed to Hate.' The Tennessee deathcore dudes tracked the disc earlier this year, and according to guitarist Alex Wade, the band meshed well with Suecof. "Suecof has produced some of the most brutal metal albums to date and we are excited for him to get his hands on our new material to make it the heaviest music we've created thus far," Wade said, amid the recording sessions.

Whitechapel's first album, 2008's 'This Is Exile,' debuted at 118 on the Billboard Top 200 charts and 2 on Billboard's Top Heatseekers list.

"Vincent has been a longtime friend of the band and we have always talked about him doing guest vocals on one of our records, so naturally his style of vocals fits our music perfectly and sounds great," says guitarist Alex Wade. "We're honored to have Deftones vocalist Chino Moreno on our record. All of us are huge Deftones fans, so it's pretty surreal for us. He absolutely killed his part on the album and it's everything I envisioned it would be. Plus it's cool that Chino was so opened minded to do vocals on something so extreme; I think that it sounds fantastic."