In terms of quality album releases, 2010 has been a fantastic year for heavy music. With so much top-notch stuff to listen to this past year, we know it could be difficult to keep up to date with everything. With that in mind, here is Noisecreep's list of 10 best songs of 2010.

10
'Ladykiller'
Priestess
Canadian combo Priestess takes the teched-out sludge riffs and heady arrangements of groups like Mastodon and Baroness, streamlines it all down, and marries it with hooky vocal lines. 'Ladykiller' should have been all over modern rock radio in 2010 -- but not enough program directors had the guts to add a relatively unknown act to their playlists. 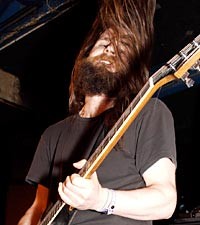 Charlie Llewellin, Flickr
09
'Fear Campaign'
Fear Factory
After the artistic and commercial misfires of their prior two records, Fear Factory came back with 'Mechanize,' easily their best album in over a decade. Having original guitarist Dino Cazares back in the fold might have been the trick. Listening to the 'Fear Campaign' single reminds us how vital the combination of Cazares and vocalist Burton C. Bell is to heavy music.
Read the Lyrics
Metal Chris, Flickr
08
'The Good Die Young'
Scorpions
Though the album it came from was a largely uneven affair, 'The Good Die Young' still proved to be one of the Scorpions' strongest singles in years. A mid-tempo number with an emotionally charged performance from Klaus Meine, it also features former Nightwish siren Tarja Turunen on background vocals.
Read the Lyrics
Jose Goulao, Flickr
07
'Mother of Mercy'
Iron Maiden
Featuring a flurry of triumphant twin-guitar melodies, the third track from Iron Maiden's latest studio effort recalls the band's golden run of albums during the mid-'80s. Anchored by an assured vocal from Bruce Dickinson and Nicko McBrain's unmistakable tom rolls and ride cymbal hits, 'Mother of Mercy' should be a standout moment in the group's upcoming tour.
Read the Lyrics
adels, Flickr
06
'Shining Human Skin'
Mar de Grises
The least known act on this year's list, Chile's Mar de Grises construct a moving style of doom metal that gets better with each listen. 'Shining Human Skin' is cinematic in its scope. Although it contains harsh vocals from Juan Escobar, its melancholic feel and sweeping production lend the song a strangely soothing touch. Keep your eyes out for these guys.
Youtube
05
'Frost Hammer'
High on Fire
Message board trolls were crying "sellout" when it was announced that High on Fire would be leaving their longtime label, Relapse Records, for the bigger indie eOne Music. The haters were silenced as soon as 'Frost Hammer,' the first single from their 'Snakes for the Divine' album, hit the iInternet. We don't think Matt Pike and company will ever be doubted again.
Metal Chris, Flickr
04
'Diamond Eyes'
Deftones
With a career that spans four decade, the Deftones still aren't showing signs of fatigue. 'Diamond Eyes' is a master class in sparkling atmospherics, metallic riffing and whip-smart songwriting. On top of everything, Chino Moreno's angelic crooning during the track's chorus is total ear candy.
Read the Lyrics
Luiz Alberto Fiebig Junior, Flickr
03
'No Funeral'
Nachtmystium
You have to hand it to Blake Judd. The Nachtmystium frontman not only wrote one of this year's finest black metal albums, he's also responsible for one of its most polarizing songs. 'No Funeral' pulsates like something you might hear in a darkwave/goth dance club, and despite its gorgeous synthesizer-led melodies, many closed-minded metalheads shunned it. Hopefully, the haters will one day recognize why it earned a spot here.
Laurynas Mereckas, Flickr
02
'Best of Me'
Ratt
This catchy slab of Sunset Strip-flavored hard rock finds Ratt mining for inspiration from their very own classic catalog. Michael "Elvis" Baskette's production doesn't sacrifice muscle for commercial appeal, while founding member Warren DeMartini and new addition Carlos Cavazo (ex-Quiet Riot) emerge as a deadly guitar duo.
Read the Lyrics
Ted Van Pelt, Flickr
01
'Goetia'
Triptykon
Clocking in at over 10 minutes, this track from Triptykon finds former Celtic Frost mastermind Tom G. Warrior guiding us through a labyrinth of down-tuned guitars, stop-and-go rhythms and, so far, one of the nastiest vocal performances in his discography. Although many of his peers from the '80s have elected to follow the nostalgia route, Warrior proves here that his songwriting is as vital now as it was during his first wave of success.
Ragnar Of Ravensfjord, Flickr
More Best Songs, Videos and Albums of the Year
Top Country Moments 2010 | Top Country Videos 2010 | Top Country Albums 2010 | Top Country Songs 2010 | Top Viral Moments in Hip-Hop 2010 | Top Hip-Hop Songs 2010 | Top Hip-Hop and R&B Albums 2010 | Top Pop Videos 2010 | A Year in Metal 2010 | Top Videos 2010 | Best Albums 2010 | Best Songs of 2010
document.write(unescape("%3Cscript src="http://o.aolcdn.com/os/aol/jquery-1.4.2.min.js" type="text/javascript" %3E%3C/script%3E")); document.write(unescape("%3Cscript src="http://o.aolcdn.com/os/aol/jquery.event.special.sonar.min.js" type="text/javascript" %3E%3C/script%3E")); try { console.info("jquery-1.4.2.min.js and jquery.event.special.sonar.min.js dynamically included") } catch (e) {}; $("img[lazyload]").bind("onscreen", function(evt) { if ($(this).attr("src")=="") $(this).attr("src", $(this).attr("lazyload")); });
Categories: Lists
Comments
Leave A Comment
The Internet’s Funniest New Tool Album Memes
10 Times Danny Carey Was the Best Drummer on Earth
Famous Musicians Who Correctly Predicted Their Own Death
10 Rock + Metal Interviews Gone Wrong
10 Amazing Animal Mosh Pits
9 Rockers Forgetting Lyrics Onstage
10 Weirdest Maynard James Keenan Onstage Outfits
10 Amazing Bruce Dickinson Onstage Moments
10 Unforgettable Onstage Reunions