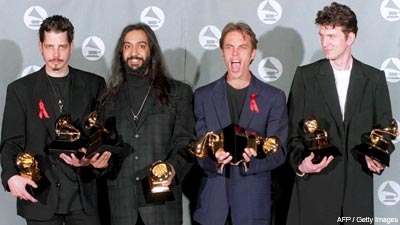 It was in 1995 that it first occurred to me that these so-called 'experts,' the ones who decide which songs are nominated for Grammy awards, didn't have a clue when it came to metal. That year, Soundgarden's 'Spoonman' took the incredulous honor away from Pantera's 'I'm Broken.' That, I would argue, was the turning point ... the beginning of the end of any kind of credibility the National Academy of Recording Arts and Sciences engendered itself just by creating the category in 1990, and then, giving the first one to Metallica for, of course, 'One.'

See, I'm of the opinion that anyone who'd tell you -- at least with a straight face -- that year after year the Grammys 'get it right' when it comes to Best Metal Performance is just wrong. Chances are they're confused, too. That's because the Grammys almost never get it right. It's as if these guys are all trapped in some bizarre void, some alternative realm where metal didn't exist beyond 1999 or off of the face of the Billboard charts.

Not that it hasn't been said a million times over since 1989, when Metallica were robbed of their first Grammy, losing to Jethro Tull, but its always worth repeating: The nominating committee are out of touch with the scene. They stick with the familiar, the safe. If it's not on a major (or a subsidiary thereof), they don't know about it, and maybe they don't want to. Hence, year after year, dudes like me who admittedly have trouble keeping up with an ever-evolving scene grumble when Grammy time rolls around. I always end up asking myself, "Did they just get a sales breakdown and go by that? Do they care to explore the genre beyond Metallica (who have eight nominations and five wins) and, inexplicably, Ministry?" 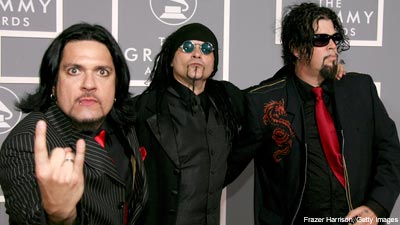 By the way, I'm calling it now: It's Ministry's year, folks. This year, Ministry's nominated for 'Señor Peligro' from the band's umpteenth farewell disc, 'Adios ... Puta Madres.' Al Jorgensen is the Susan Lucci of the metal Grammys, having netted four other nods before this, three of which came within the last four years. The were first nominated for 1992's 'Psalm 69' but then were ignored until 2000, when they got a nod for a track called 'Bad Blood,' a song no one I know has ever heard, which was written for the 'Matrix' soundtrack.

I love Ministry, but I love old Ministry. Why, then, do the Grammys keep nominating Ministry, whose albums haven't made any respectable Top 10 list since the mid-1990s. Then, there's the nomination of non-metal acts. In 1992, Metallica's 'Metallica' won the award, besting Anthrax, Megadeth, Motörhead and, of all bands, Soundgarden, who most would argue are not metal.

The committee has long been hung up on Metallica, who actually won the Grammy three years running, starting in 1990. In 1991, the band's track 'Stone Cold Crazy,' a freakin' cover that appeared on some compilation none of us own. That year, Metallica beat out Judas Priest's 'Painkiller,' Anthrax's 'Persistence of Time,' Megadeth's classic 'Rust in Peace' and Suicidal Tendencies' 'Lights ... Camera ... Revolution!' Seems to me Megadeth were the obvious choice. But then again, it's the Grammys.

And like its bent for honoring soundtrack compositions (like Megadeth's 'Angry Again' from 1994's 'Last Action Hero' soundtrack and 1995's '99 Ways to Die' from 'The Beavis and Butt-Head Experience' comp and Rage Against the Machine's 'No Shelter' from 'Godzilla'), the committee has long had this preponderance for nominating live tracks, which is odd.

In 1996, Nine Inch Nails won in this category for 'Happiness in Slavery' from 'Woodstock '94,' beating out a Gwar studio track and White Zombie's 'More Human Than Human.' That same year, Metallica were nominated for their Woodstock version of 'For Whom the Bell Tolls.' That year, other studio LPs were overlooked for songs written years earlier, just because they were performed live. Nominating live tracks is like buying Dad a tie ... you're just being lazy.

Things changed slightly in the 2000s, and it looked like things might be improving. But the decade started off on a strange note, after Nashville Pussy somehow nabbed a nomination the year before. See, while the nominations showed signs of improvement, the winners still left metalheads scratching their noggins.

In 2000, for instance, Black Sabbath won for 'Iron Man.' The song was first released in 1971 but won because, that year, the band released 'The Best of Black Sabbath.' Nine Inch Nails and Rob Zombie, again, were among that year's losing nominees. In 2001, the Deftones actually won for 'Elite,' a track off of 'White Pony' never released as a single. While I love the Deftones, that same year, Slipknot's 'Wait and Bleed' and Pantera's 'Revolution Is My Name' were also nominated. Seems the ball was dropped once again. 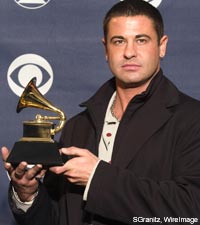 Korn won in 2003 for a track off of 'Untouchables,' facing stiff competition from P.O.D., Stone Sour, and, you guessed it, Rob Zombie, who probably should have won that year for 'Never Gonna Stop.' Still, a lot of people would argue Zombie is hard rock and not metal. Then, in 2004, the Grammys nominated Stone Sour again, and Korn ... and Spineshank. Take that in for a second. Spineshank were nominated for a Grammy.

In 2005, a Motörhead cover of a Metallica song ('Whiplash'), beat out a spate of original studio material from Roadrunner bands: Cradle of Filth, Hatebreed, Killswitch Engage and Slipknot, who won the very next year, facing off against Mudvayne, Rammstein, Shadows Fall, and, yep, Ministry.

The Grammys had a serious chance for redemption in 2005, and could've really blown people away by giving it to Cradle or Killswitch. But they did the safe thing: giving a long overdue honor to Motörhead, for a Metallica cover. They could have done it again in 2007, when Lamb of God and Mastodon received nominations. But they gave it to Slayer for a song off of 'Christ Illusion.' That same year, Ministry and Stone Sour were also nominated, not surprisingly. 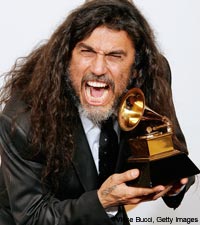 Slayer won the next year, too, for another 'Illusion' cut ('Final Six'), defeating nominees As I Lay Dying, King Diamond, Machine Head and Shadows Fall. Again, a win for Shadows or Machine Head would have restored some fans' faith in the Grammys, but the opportunity was wasted. Last year wasn't much different. Metallica won its eighth Grammy, when DragonForce or, you know it, Ministry could have won it.

Yes, I'm aware that some legacy acts get consideration just because. But that doesn't excuse the Grammys' ignorance of the genre or its laziness. At this point, winning a Grammy in the metal category is certifiable proof your band isn't metal anymore, if it ever was in the first place.

Next year, the Grammys should rethink this category and who they turn to for nominations. Instead of label folks pushing their own agendas, perhaps take a Hall of Fame nomination approach, by seeking input from journalists. Otherwise, the charade will continue, and only albums that sell thousands of units for major labels, from legacy acts ignored at the height of their greatness, will be recognized.