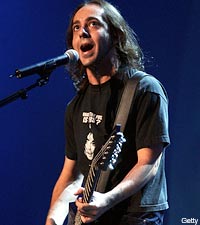 Three years. It's been three long years since System of a Down first went on hiatus. Three years. System of a Down bowed out on a high note, at the height of their fame, allowing frontman Serj Tankian to strike out on his own with a solo album while drummer John Dolmayan and guitarist Daron Malakian formed their own side project, the ill-received Scars on Broadway.

While there have been no signs the band would reunite since they first parted ways, that all changed Halloween night, when Dolmayan and Malakian were joined on stage by SOAD bassist Shavo Odadjian and Scars on Broadway's Franky Perez for a performance during Odadjian's Halloween bash at the Roxy Theatre in West Hollywood, Calif., on Saturday.

The impromptu set featured three songs, including System's 'Suite-Pee' and Scars on Broadway's 'They Say.' But is this the first sign that the band may be regrouping? When System first went on hiatus, Malakian said the break would likely last a few years, which Odadjian specified as a minimum of three years. "We're not breaking up. If that was the case, we wouldn't be doing this Ozzfest," he said in 2006. "We're going to take a very long break after Ozzfest and do our own things. We've done System for over 10 years, and I think it's healthy to take a rest."

While Tankian's absence isn't the greatest sign for a reunion, the fact that Scars on Broadway are essentially over is. Malakian canceled the band's headlining tour last fall, and cited his lack of enthusiasm and "his heart not being into touring" as the chief reasons for the trek's cancellation. "The music of Scars will live on, but now is a time when aspects of my life need to be tended to."

Scars on Broadway sold just under 24,000 copies of its self-titled debut album during its first week of release, while Tankian's 'Elect the Dead' opened with 66,000 sold in the fall of 2007. 'Scars On Broadway' has scanned just 78,000 copies since its release.