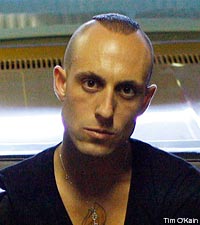 Not only does Frank Zummo smash the skins for his band, Street Drum Corps -- who will be making their major label debut soon -- he was also tapped to man the drum kit for Mötley Crüe's during a string of Crüe Fest 2 dates in late August, when drummer Tommy Lee went down with an injured hand. Zummo was kind enough to discuss the once-in-a-lifetime opportunity here on Noisecreep. What a summer!

I've had the absolute greatest summer of my life. Spending months in the studio with my band Street Drum Corps, recording two albums for our Interscope Records major label debut due out early 2010 has been incredible. And as an awesome end to the summer, I had the honor of sitting in for Tommy Lee on five shows with the legendary Mötley Crüe, playing in front of 10-30 thousand people with full, two-act production each night!

Mötley Crüe was the first concert I ever went to -- I was 5 years old, and seeing them as a little kid made me want to do music when I grew up. I learned to play drums while listening to the Mötley records in my parents' basement, so in a weird way I felt like I had been playing with the band my whole life. And as a cool-ass twist of fate, now as an adult, I'm friends with Tommy Lee.

I was already coincidentally en route to Boston to hang with Tommy for a few dates on Crüe Fest 2 as part of my vacation. When I arrived, he told me that his hand was not fully healed from an injury and asked me to play drums the next few shows. I was thrilled and freaking! We got to work immediately with me taking copious notes from 'Coach Lee.'

Since the next day was an off-day for the band, I holed up in my Virginia Beach hotel room with the set list and music to prepare to play the entire 'Dr. Feelgood' album and other seminal hits. Once the curtain dropped, exposing the stage, we were off! It was like being in a surreal dream and I played my heart out, loving every second of it. Despite not having a sound check or rehearsal, I stepped onstage that next night and powered through an-hour-and-45-minute set of pure rock without making a mistake! Tommy told me that seeing me play his band's music was like he was watching himself. Everyone on the tour called me 'Mini Lee' or 'Frankie Lee.'

The show in Tampa was major for me, because the whole Zummo family was in attendance. After the second song, Tommy came out to talk to the crowd and introduce me, and said that my father was in the crowd and it was he who had taken me to my first concert that happened to be Mötley Crüe. The audience went crazy, and my father stood on his chair screaming and high-fiving the people around him. It was a huge full-circle moment for my father and me, and truly a dream come true.

Mötley Crüe has long been my favorite band and they have always inspired and influenced me as a musician. Having the opportunity to play with them onstage has motivated me to continue working hard to achieve that level of great success with Street Drum Corps. I will never forget my amazing experience playing with the Crüe -- I have so much love and respect for those guys!