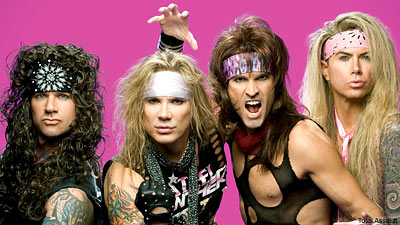 Glam rockers Steel Panther are hoping to break the Guinness Book of World Records for the longest-running show.

In between those dates, as well as the shows it plays on Fridays and Saturdays in Las Vegas, it has been doing spot promotional performances.

"It's crazy. It works out good," Starr said. "We cut our teeth playing cover songs by bands like Motley (Crue) and Guns 'N Roses, which are killer and still fun to play. We're starting to slowly pour more of our stuff in there. It's really starting to take off. It's fun. People are really starting to dig it."

So are celebrities. Some famous singers, including Down's Phil Anselmo, Kelly Clarkson, David Cook, Backstreet Boy Nick Carter and Jessica Simpson, have lent their vocals to live shows. If Steel Panther hates everything but metal, like it sings in "Death to All But Metal," why allow mainstream folks on stage?

"We're like heavy metal missionaries," Starr explained. "Our job is not only to bring metal back to people who long for it, but we're also here to change the face of music as it is today. The way to do that is really by evangelizing. We pretty much baptized Kelly Clarkson into metal with whiskey and some Guns 'N Roses. If you look at her now, everything's a little different now. "

Clarkson retreated to her "hotter look," Starr added, and now that she's showing off her body more, her sales have increased.

"It's like we're planting these heavy metal seeds in all these stupid contemporary artists' brains," Starr said. "Mentally they're going to blossom into heavy metal guys and women. Another disguised heavy metal band is Linkin Park. Chester (Bennington, singer) got up and ripped it up. Honestly dude, I'm going to be honest here: I thought Linkin Park was totally gay. They're not metal. He got up and sang and I was like, 'This guy can totally sing.' I started listening to their older stuff a little bit because there was this girl I had sex with her daughter was listening to it. That's not too bad. It's metal but it's kind of that disguised metal because people are so afraid to look like we do and to rock. Think about it."

Starr said rockers are afraid to dress like him and his bandmates because they worry they will not get record deals.

"Do you remember a band called Nirvana?" Starr asked. "Back then, when Nirvana came on, everybody had long hair and they were wearing Spandex and they were rocking out. Nirvana came out and all the record labels ran over to Nirvana and Seattle and started signing bands that look like them. All the bands in L.A. said, 'Well if we want to get a record deal, we better do what they're doing.' So they all put on flannel shirts, boots and cut off their jeans and started rocking out that way. But they're still heavy metal bands. They're just disguised now. Get it?"