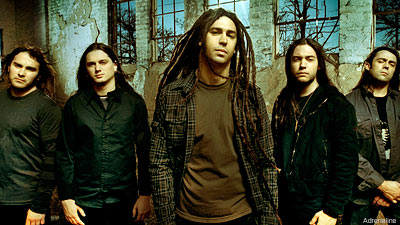 "The new Shadows Fall record is a true cross-section of all our influences, past and present," vocalist Brian Fair, who sports knee-length dreadlocks that are the stuff of legends, told Noisecreep. "We tried to hold nothing back and decided to take chances to avoid putting out a safe, by-the- numbers' record." With that statement, Fair has set the bar of fan expectation incredibly high, but the Shads can live up to it.

"There are songs based on pure aggression and chaos, like 'My Demise' and 'Embracing Annihilation,' that showcase the thrash metal and melodic death metal influences that have been the bedrock of the Shadows Fall sound. There's tons of shredding guitar leads, double bass drum insanity and full on screaming." But Fair is quick to note that all song titles are subject to change as the band is "still figuring it all out" and that the new album is not all fury, all of the time, saying, "Songs like 'The Taste Of Fear' and 'Picture Perfect' owe more to the production of pop rock bands Def Leppard and Boston, than, say Testament or Carcass. There's huge vocal melodies, harmonized gang vocals and layers that push the songs to new levels. It may sound schizophrenic but it all makes sense and creates a dynamic that I believe separates this album from a lot of the cookie-cutter metal records flooding the market today."

Fair also revealed that the one song he is super-stoked about is "the full on speed assault of the track 'War.' This is the most relentless Shadows Fall song ever and it incorporates lyrics from a speech by H.I.M. Haile Selassie that was used in the Bob Marley song 'War.'" The band recorded at Planet Z in their native Massachusetts with Zeuss and then tracked vocals in Virginia with Michael "Elvis" Baskette. While many bands might balk at recording in two locales, the Shads relished it, with Fair saying, "The combination could not have worked out better. Zeuss has been working with us since the beginning and truly understands our sound. Working with Elvis brought a fresh perspective and allowed us to tap into new ideas and push ourselves in ways we never thought." The as-yet untitled new album is finished and will be released in September, but the band will keep busy by touring Alaska for the first time –"to rock a few shows and wrestle polar bears," Fair said-and then it's off to play Bonnaroo with the likes of Phish and Bruce Springsteen!