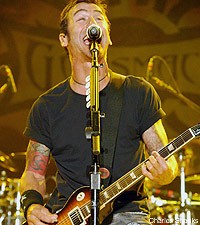 "Are you ready to make some memories?" Drowning Pool frontman Ryan McCombs screamed at the ever-growing crowd of kids in the pit at Rock on the Range. The Columbus, Ohio festival went down May 22 and 23 at the Crew Stadium -- an appropriately perfect venue for just the right mix of metal, mud and horrible tattoos.

Memories or moshing, something was happening in the pit as bands like Sevendust, Drowning Pool, Puddle of Mudd, Papa Roach, Deftones, Rise Against, Three Days Grace and Godsmack rocked the Saturday main stage. As with every festival, some bands are received better than others -- and one of the biggest, rowdiest crowds of the day came for Papa Roach. During Roach's entire set, clouds threatened and sprinkles scattered here and there, offering the chance at even more mud on festival property.

Rain battered Columbus for much of the week preceding the fest, and the ground was squishy and trampled with fans walking around in mud-caked sneakers and flip flops. For all their old standards and fan favorites, the guys in Papa Roach took the time to play a new song for the massive crowd. Called 'Kick in the Teeth,' the song will appear on the band's forthcoming album, 'Time for Annihilation.' 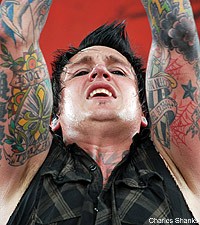 Some fans went more for the people watching than the music. Band T-shirts are common at every rock show, but a large portion of the crowd at Rock on the Range seemed to enjoy crass humor. One man was spotted wearing a shirt that simply said 'I f--- sheep.'

Back in the pit, the music rolled on and on, stirring crazed kids into a frenzy and sending the older crowd running for the safety of the bleachers. On the side stage, Killswitch Engage jumped and kicked through a set of classics ... but when it came time for the cover of Dio's 'Holy Diver,' it was as if everyone in Crue Stadium was singing the same words at the exact same time. Giving honorable props to Ronnie James Dio, KsE guitarist Adam Dutkiewicz asked the crowd to really get into the song. The introduction wasn't necessary -- 'Holy Diver' brought the house down.

By the time the second day of Rock on the Range rolled around, the sun was beating down and there was both confusion and excitement in the air. Apocalyptica, Five Finger Death Punch, Bullet for My Valentine, Theory of a Deadman, Slash, Seether, Rob Zombie and Limp Bizkit were set to rock the main stage. 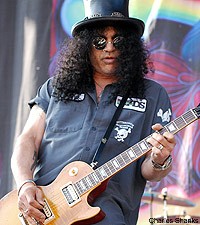 Finnish metallers Apocalyptica brought out many curious on-lookers and easily gained new fans. The set included some of the band's originals as well as Metallica covers. Perhaps most interesting was the surprise string break that was changed in less than 20 seconds flat right on stage! Who says cellos aren't metal?

The burly, yellow-shirted security guards didn't like Five Finger Death Punch very much. Singer Ivan Moody urged all the kids to crowd surf to the stage and "shake his hand." Not wanting to be bad fans, many in the crowd obliged, and it was nearly impossible to concentrate on the band's music at one point because bodies were floating -- and falling -- everywhere.

Now touring behind 'Fever,' Bullet for My Valentine cranked the PA and left posers for dead. Playing heavy hitters 'Waking the Demon' and 'Scream Aim Fire' early in the set, BFMV left plenty of time for new songs. They easily won the award for loudest band of the weekend. 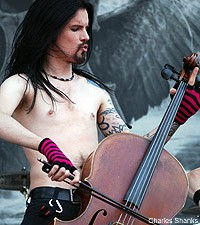 It's not like Slash hasn't played a million shows in his career. It's old hat at this point, pun very much intended. Still, there was some special magic hearing Slash doing those famous guitar runs in 'Sweet Child O' Mine' right beside singer Myles Kennedy. For better or worse, Kennedy can outsing Axl Rose on classic Guns n' Roses tunes. Slash and his friends also did 'Nightrain' and 'Paradise City.'

Giant robots and pyro meant Rob Zombie didn't cheap out on his stage show. In fact, he brought the heat and gave the crowd some of his most famous songs very early in the set. 'More Human Than Human' was made special by a giant dancing robot, and Zombie got the crowd pumped for 'Mars Needs Women.'

The musician turned filmmaker turned musician announced plans to shoot the Rock on the Range crowd for his 'Mars Needs Women' video. The highlight of the set came during 'Thunder Kiss 65,' as guitarist John 5 took off on an extended solo, proving why he's one of the best guitarists in all of metal.

Last year, more than 30,000 attended Rock on the Range. An official attendance figure for the 2010 event has not yet been released. 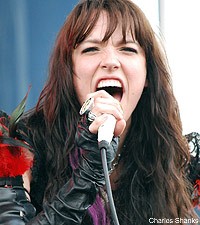 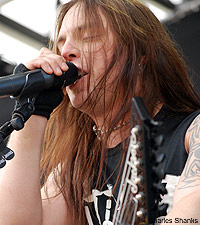