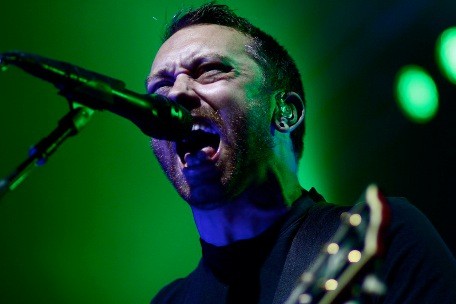 American punk heroes Rise Against are currently storming across the U.S. in typically high-energy style, bringing it to the people like only they can. Progressive, plugged in and never afraid to walk a cause like they talk a cause, Noisecreep had the pleasure of chatting with lead singer/guitarist Tim McIlrath recently about the band's philosophy, and commitment to their causes.

McIlrath is that rare rock star that is informed and dialed in not to just to music history, but social history. He's an extremely well-versed spokesman for a band that always manages to matter.

Tim, when did you first realize that music could be a force for social justice and activism?

As a band, we all got there in different ways. For me, personally, I started out listening to a lot of classic punk - Black Flag, Jawbreaker - then I got into bands like Nirvana and a lot of the other amazing alternative bands from that era in the early '90s. But it wasn't until I found the Chicago hardcore scene that I found bands and music that could seen as a vehicle for ideas of change - so that triggered my interest in an active way. I thought, wow, this medium has so much potential. These were not big name bands. But they were important, tough bands from rough neighborhoods. Los Crudos was an all Latino hardcore band - they were great. As was Sidekick Kato - these amazing grassroots bands that had powerful messages. Huge influences on me.

And there's always a line, right, between preaching and making your point.

And I don't claim to have it all figured it out - where that line is! [laughs]. I mean, are we informing or preaching or shoving it down their throats? Which is it? We learn something new every night when it comes to those things. I've been in so many audiences when a band alienates I've crowd - and I've also seen when messages presented tastefully. I always try to learn and learn and I will tell you, when we walk out today and the crowd comes alive- when that his us - I start to feel that we maintain a good balance. Night after night after night.

Your audience understands your band, it seems.

Definitely. I write to feel less alone, then when people come to the shows for the same reason - it all pulls together into a perfect storm.

Tim, this is an election year - will you dial up your messages a little more?

We might be a little more motivated. It gets tricky. Politics are so prepackaged today - far left wing, far right wing - we think it's confused a lot of our younger fans. We never want to present either side of politics as a stereotype - as it applies to our songs, we want our songs to be more timeless and not locked onto some current political catchphrase or stereotype. We want our fans to understand the bigger picture. Don't just blame elected officials, but find out the root causes of what is going on. Be educated.

A few years ago, so many bands were attacking Bush - at the same time, by just attacking him, they were also attacking a symptom of a much bigger problem. It didn't start with him and didn't end with him leaving. There are many long-running problems in our political process.

So you won't be endorsing one person in particular this year?

I don't think so. But there are some major issues we will all attention to: immigration, women's rights. As a band, we have an opportunity to engage and help our fans realize what is at stake. Our rights were fought for. Someone protested and spoke out. They were earned and we like trying to follow in that legacy of speaking out.

Do you relate to other activist artists, say Bob Marley and The Clash to name a couple?

Totally. Those are the trail blazers. We can learn so much from musicians like that - people who made music that was unapologetically riveting. I will tell you a song that did it for me, too. "Ohio" by Crosby, Still, Nash and Young. What that proved to me is that you can have a song that makes a powerful point, and it can still be a big jukebox hit - it can move the masses while it gets played all over. I love the fact that we can have a big record, but that it is also saying something important to us. That means everything to us as a band. That's what this band is all about.

Rise Against recently released an EP entitled Satellite exclusively on iTunes. In addition to "Satellite," the EP includes live versions of "Savior" and "1,000 Good Intentions" recorded at the Boston House Of Blues, plus the "Satellite" music video.

Rise Against on tour with A Day to Remember and Title Fight: